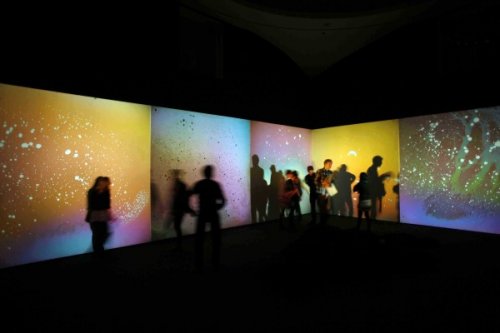 [ad#lb]
The Serpentine Gallery presents a major exhibition of work by the influential artist and activist Gustav Metzger, examining his life-long exploration of politics, ecology and the destructive powers of 20th-century society. Metzger’s career has spanned over 60 years and this is the most extensive survey of his work to be shown in the UK.

The exhibition draws together the themes and methodologies that have informed the London-based artist’s practice from 1959 until the present day. The broad cross-section of works on view include Metzger’s auto-destructive and auto-creative works of the 1960s, such as his pioneering liquid crystal projections; the ongoing Historic Photographs series, which responds to major events and catastrophes; and later works exploring ecological issues, globalisation and commercialisation. Film footage of seminal performances and actions are exhibited, as well as a new, participative installation using the archive of newspapers Metzger has been collecting since 1995.

Born in Nuremberg, Germany, in 1926 to Polish-Jewish parents, Metzger and his brother Mendel were evacuated to Britain in 1939. During the 1940s, Metzger studied painting at various art schools in Britain and Belgium. However, in 1959 he abandoned painting and started creating works using everyday materials such as cardboard, newspapers and polythene bags with paper and fabric scraps.

These demonstrated the creative potential of industrial processes, while at the same time offering a critique of the waste inherent in consumerism. In 1959 he published his first auto-destructive art manifesto, using political and ecological issues as a starting point for his concept of a ‘public art for industrial societies’. As well as reflecting the political and economic systems that Metzger sees around him, his auto-destructive works use time itself as a medium – as in the renowned 1961 South Bank Demonstration, where the artist slowly disintegrated three large nylon ‘canvases’ with sprayed acid.

Metzger was ahead of his time in his adoption of industrial materials and concern for environmental issues. He has exerted a lasting influence on his contemporaries and subsequent generations of artists, and his continually evolving practice remains prescient today.

The Serpentine has collaborated closely with Metzger on a number of projects since 2006, including the Interview Marathon, 2006, Experiment Marathon in both London and Reykjavik, 2007, and Manifesto Marathon, 2008. The artist also spoke at the Serpentine’s On the Conditions
of Politics conference in 2007.