Roxy Paine on the Roof: Maelstrom 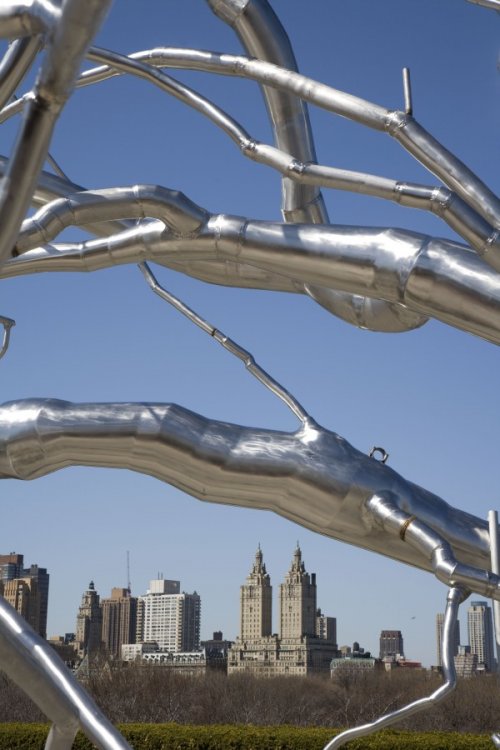 [ad#lb]
Conceptual artist Roxy Paine (American, b. 1966) has created a site-specific installation for the 2009 season of The Metropolitan Museum of Art’s Iris and B. Gerald Cantor Roof Garden, the most dramatic outdoor space for sculpture in New York City. Roxy Paine on the Roof: Maelstrom features a 130-foot-long by 45-foot-wide stainless-steel sculpture, Maelstrom (2009), that encompasses the nearly 8,000-square-foot Roof Garden, and is the largest sculpture to have been installed on the roof of the Metropolitan. Set against, and in dialogue with, the greensward of Central Park and its architectural backdrop, this swirling entanglement of stainless- steel pipe showcases the work of an artist keenly interested in the interplay between the natural world and the built environment, as well as the human desire for order amid nature’s inherently chaotic processes.

Gary Tinterow, the Museum’s Engelhard Chairman of the Department of Nineteenth-Century, Modern, and Contemporary Art, stated: “Roxy Paine has created for the Metropolitan Museum his most remarkable work to date, a stunning sculpture that commands the environment through interaction. I feel certain that our visitors will marvel at the complexity of the structure, and delight in its beauty.”

A provocateur, Paine builds elaborate and complex constructions to address conceptually complex concerns, providing fertile ground for thought and contemplation.
Since the mid-1990s, he has created a diverse body of work that falls into several distinct yet related categories: naturalistic works (startlingly realistic, hand-formed replicas of botanical forms and fungi, rendered with synthetic materials and featuring various stages of growth and decay); machine-based works (intricate, computer-driven machines that mechanically produce abstract paintings, sculptures, and drawings); and a series of large-scale stainless-steel Dendroids, fabricated from industrial components.

In the latter category, Maelstrom is Paine’s most complex and ambitious sculpture to date, evoking a Da Vinci-like study of whirling water or a neural network. It is part of a series of work based on dendrites’ branching structures such as trees, neurons, industrial pipelines, or vascular networks. The Dendroids, as the series is called, began in 1998 with installations studying the innate logic of trees. Exquisitely crafted and
largely handwrought, Maelstrom is composed of thousands of variously sized, cylindrical stainless-steel pipes and rods that have been welded together. More than seven tons of material comprise the sculpture, which was hand-welded in the artist’s upstate New York studio. Familiar themes are at play—artificiality and the natural world, sly humor and irony, control and chaos, abstraction and figuration, and the machine-made and the handmade—while conceptually complex concerns are addressed, such as human desire to control nature and nature’s indifference to that desire. Visitors are encouraged to move throughout the installation to experience its inherent drama and turbulence.

Born in New York in 1966, Paine grew up in the suburbs of Northern Virginia. He left home at age 15, crisscrossing the United States, and studied art at the College of Santa Fe, New Mexico (1985–86), and Pratt Institute, New York (1986–88). Since 1990, his work has been exhibited internationally and is included in a wide spectrum of public and private collections in the United States and abroad. He lives and works in Brooklyn, Long Island City, and Treadwell, New York.

In conjunction with the installation, some education programs will be offered, including gallery talks on May 28, June 16, July 7, and July 23. The installation will also be featured on the Museum’s website at www.metmuseum.org.

Roxy Paine on the Roof: Maelstrom is organized by Anne L. Strauss, Associate Curator of the Department of Nineteenth-Century, Modern, and Contemporary Art at The Metropolitan Museum of Art, with organizational assistance by Taylor Miller, Associate Building Manager for Exhibitions, and graphics by Barbara Weiss, Senior
Graphic Designer.