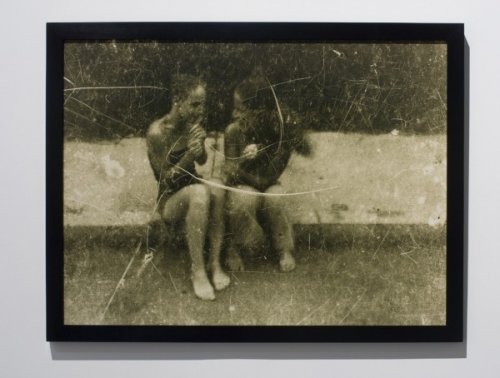 [ad#lb]
The SONIC YOUTH etc.: SENSATIONAL FIX exhibition which combines art and music, has been curated by Roland Groenenboom in close collaboration with the band Sonic Youth.

SONIC YOUTH etc.: SENSATIONAL FIX investigates the collaborations between the historic band, which was formed in1981, and artists, writers, filmmakers, designers, and other musicians. The multimedia works of Sonic Youth and those of the artists exhibited in the show reveal a possible alternative history of contemporary culture, with a critical discussion of the division between ’high’ and ’popular’ art, with topics such as youth rebellion, hunger, fashion and sex. The various sections revolve around a central area, which illustrates the band’s long history, with records, posters, T-shirts, instruments and photographs.

The exhibition also investigates their tour experiences: this section includes works that present the city suburbs, the desire to travel and the great open landscapes of the West, while its protagonists – beatniks, hitch-hikers and cowboys – tell their stories. The section also looks at the music and lyrics produced by members of the band. Artists on show include: William S. Burroughs, Allen Ginsberg, D.A. Levy, Thurston Moore, Lee Ranaldo, John Cage, Glenn Branca.

In the early 1980s, Sonic Youth started working on the West Coast, a physical and mental environment that was an important starting point for the artistic development of many artists in the late sixties. This part of the exhibition contrasts the tinsel glamour of Hollywood with the aggressiveness symbolised by the homicidal sect of the Manson family and Californian hardcore-punk. The period is captured in the works of Mike Kelley, Raymond Pettibon, Cameron Jamie and Kim Gordon.

The fourth section of the exhibition shows works by artists working outside the US art scene, such as Tacita Dean (England), Isa Genzken (Germany) and Michael Morley (New Zealand).

The artist Dan Graham has specially designed a pavilion for the exhibition in which visitors will be able to hear the band’s sound archives and other material, including recordings by the artist himself. Visitors can also watch films, video clips, and selected recordings of concerts and performances by Sonic Youth.

SONIC YOUTH etc.: SENSATIONAL FIX describes the band’s 30 years of transversal projects, retracing the stages of their formidable artistic career which has been inspired by the ideal of a world outside the mainstream of mass industrial culture. The exhibition is produced by Museion, Bolzano and LiFE, St Nazaire, in collaboration with Kunsthalle Düsseldorf and Malmö Konsthall.

The catalogue, distributed by Verlag der Buchandlung Walther König is available in English. Two 7-inch vinyl records are included in the publication. Each side contains a special sound piece created by one of the members of the band.

Sonic Youth gives two concerts while in Sweden, Wednesday 27 May in Malmö and Thursday 28 May in Hässleholm. Their new album, The Eternal, is released 9 June.

Lords of the Samurai Roxy Paine on the Roof: Maelstrom