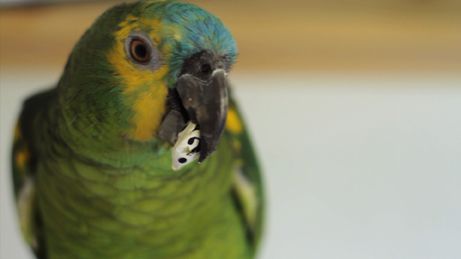 In her poetic works the Brazilian artist Rivane Neuenschwander (born 1967) explores themes like communication, migration and consumption. She works primarily with installations, film and photography. Her art has a special sensitivity and is not always based on the visual but also on sound, smell and sensation.

Neuenschwander is fascinated by nature and how it is constructed. In her works, living organisms (fish, parrots and ants) or traces of something living (snail tracks or insect wings) play a central role. She is particularly interested in nature’s hidden, chaotic forces which humans cannot fully control. Just as in nature itself, her works often contain an element of chance. Her works are changeable and sometimes interactive.

The themes of changeability and mutability also occur in her choice of materials such as dried spices and fruit peel, whose smell and power disappear, or, to put it another way, die over time; water droplets, which fall and seem to try to capture the passage of time; or soap bubbles, which slowly fly through the air during their short moment of eternity. The parallels with our own lives are very clear. Humans are also a changeable material, and like a soap bubble there is only a thin membrane that separates our inner reality from the outer one – the subjective from the objective.

The exhibition at Malmö Konsthall – Neuenschwander’s first in northern Europe – features both older works and new site-specific installations. The work Alarm Floor is inspired by the “nightingale floors” in the Ninomaru Palace in Kyoto, one of the world’s earliest alarm systems. Together with the group O Grivo, she has constructed a sound-emitting floor whose planks function like huge piano keys. The floor reveals the movements of visitors while also giving them the opportunity to create their own sound compositions alone or together. Neuenschwander has also created another interactive installation which permits direct communication. Many blown-out eggs filled with letters invite visitors to indulge in a Scrabble-like game. Each egg contains a letter, which first becomes visible when the egg is held up to the light. The user creates words by placing the eggs in a row but the resulting message is invisible to the next visitor unless he or she decodes it, egg by egg, in the light of the lamp.

In a number of her works Neuenschwander highlights aspects of reality which people normally never notice. She spotlights these “insignificant” details in various ways and makes us notice – and in the long run re-evaluate – their existence. One example is At a certain distance (Ex-Votos*), in which she has reproduced existing votive paintings. In her copies she has left out the real motif (the figures and texts) and instead concentrated on the background – the architectural setting. She does something similar in the installation Palatable Digressions when she focuses on “hidden” lines in the architecture of Malmö Konsthall by giving them added force. Using the skylights of the light well as a starting point, she has built a diagonal line through the room consisting of 56 plastic panels. She has filled the air space between the panes with spices of various colours. The result is a three-dimensional minimalist painting which follows the architecture and which is not only visual but also appeals to our senses of smell and taste.