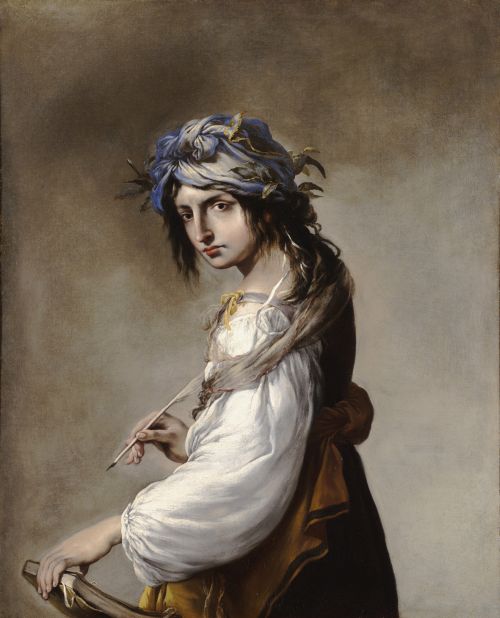 Salvator Rosa (1615-1673) was one of the boldest and most powerfully inventive artists and personalities of the Italian 17th century. He invented new types of painting: allegorical pictures, distinguished by a haunting and melancholy poetry; fanciful portraits of romantic and enigmatic figures; macabre and horrific subjects; philosophical subjects, which bring into painting some of the major philosophical and scientific concerns of his age. His early works, particularly the landscapes, are bright and rich in picturesque motifs – crumbling towers,boats on the sea shore, colourful travellers crossing perilous bridges, bandits lying in wait in rocky ravines. But he moved towards a grander style, and his mature art is characterised by his dazzlingly free technique, and by his rich chiaroscuro and dark but strong colours which create a suggestive atmosphere. No other artist has created windswept landscapes of such expressive and emotional power, or figures of such dark and brooding intensity. Rosa invented an emphasis on freedom and sincerity. He aimed to intrigue powerful patrons by his mysterious and independent personality. Unlike Caravaggio, Rosa was truly a rebel, radical, anti-clerical, associated with libertine thought, and often in very real danger from the Inquisition.

The last major Rosa exhibition was held at the Hayward Gallery in 1973. Rosa’s paintings will be hung thematically. This will deepen our understanding of the different genres of painting to which Rosa made so fundamental a contribution. Themes will range from a selection of Rosa’s self-portraits and fanciful portraits to the artist’s landscapes – pastoral, heroic, anchorite. Some of these are stark works, and the power of the elements pulses through them, of wind, water, fire and cloud; they are linked in theme to the paintings of magic and science. They convey a 17th century sense of the awesome grandeur of the natural world revealed by the new science. Throughout his life Rosa mixed with scientists, philosophers, and men of letters, and delighted in the most unusual and learned subjects. A section of the exhibition will present an anthology of paintings inspired by science and philosophy. The climax of the show will be a group of large figure paintings at the centre of Rosa’s interests. Together they show Rosa’s strangeness and eccentricity, and yet his gifts for creating intense and highly personal poetry.

The exhibition is curated by Dr. Helen Langdon, the international expert on Salvator Rosa. She has been assisted by Dr. Xavier F. Salomon, Arturo and Holly Melosi Chief Curator at Dulwich Picture Gallery, and Dr. Caterina Volpi of the University of Rome.