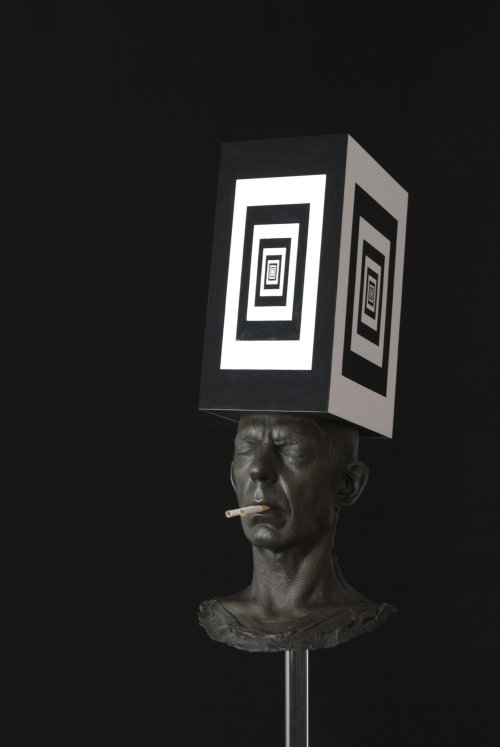 Under the title “Onomatopoeia”, the Kunstverein Hannover proudly presents the latest works by Scottish artist Charles Avery (born 1973), who has devoted himself exclusively to the creation of a fictional island archipelago since 2004. In detailed, large-scale drawings, installations, sculptures and objects, Avery forms a bizarre imaginary reality out of diverse philosophical ideas and concepts: Fabulous creatures, deities, tourists and adventurers are embedded in a complex social structure, merging into an entire cosmos that ranges between pure fantasy and theoretical reflection.

Around 40 works are assembled in this solo presentation that is on show from August 28 to November 7, 2010 and not only represents his debut in Germany, but also his most comprehensive exhibition to date. As if in a reportage, it invites the viewers to immerse themselves in the bustling activities of Onomatopoeia (the term for a word sounding like the sound it describes), the capital of this world, where objectivity is believed to indicate imbecility.

Charles Avery constructs his island world on a visual and a literary level: The ink, pencil and charcoal drawings executed with convincing precision and imaginative detail illustrate scenes from the islanders’ everyday life while objects suggested as “souvenirs” – stuffed creatures such as a one-armed snake or curiosities like a collection of philosopher’s hats – underscore the believability of the place and make the island tangible. The pieces are accompanied by texts from the books “The Islanders: An Introduction” (2008) and the catalog published on the occasion of this exhibition “Onomatopoeia: The Port” (2010) in which Avery introduces the island’s characters and special features in a robinsonade style.

The core of the exhibition is the drawing of the Port of Onomatopoeia (2009/10) measuring 2.5 by 5 meters: The “Utility,” one of the numerous ships that bring tourists and adventurers to the island, has just landed. The jetty is populated by native if’en, stone-mice and eel sellers, tourists wearing the popular “I counted the gods and they are infinite” t-shirts and the ever-present dog-like silverbobs.
There, the two ports of entry, “Duty” and “Identity,” provide an initial indication of the city’s main attraction: the eternal dialectic.

The eternal dialectic is a collective debate that takes place day and night on the streets and in the many cafés and bars of Onomatopoeia, the interiors of which have been captured in numerous drawings („Magregors Bar“, 2008 / „The Bar of the One Armed Snake“, 2010).
The dispute is sparked off by fundamental philosophical questions – If both sides of the world are identical, is it really two different sides? Is the world an entity or can it be divided into parts? – and not least the question regarding the existence of the noumenon.

While the concept “noumenon,” meaning “what is conceived” as the antonym of “phenomenon: what is perceived,” was used for example by Kant as a synonym for the expression “the thing-in-itself,” in Charles Avery’s work it appears as a legendary creature which is said to live in the mountains “phenomenon of the noumenon” but has never been seen, let alone captured, despite the efforts of hunters and adventurers on countless expeditions.

The main debaters of the eternal dialectic are, on the one hand, the positivists who support the hunters of the noumenon and are convinced of its existence, and the rationalists on the other, who make fun of the hunters and positivists. There are numerous other convictions between these poles ranging from the solipsists („Solipsist“, 2010) who only believe in their own existence and the balance obsessed dualists („Dualist“, 2010) who constantly seek parallels and equivalents, to the radical metas who, beyond all dialectics, have come to regard violence as the purest form of expression and whose rebellious posters appear on house facades in numerous drawings.

The most eloquent speakers in the individual groups are the “dooks” who are easily recognizable by their hats, seventeen different examples of which are gathered together in the exhibition. The form of the hats is oriented on the wearer’s philosophical direction: The esoteric Diskworlders who comprehend the world as area and whose approach is most closely related to the creationists in our reality, wear a flat round headdress while the hat worn by the solipsists has a prickly construction that aggressively protrudes into its surroundings. The metas, by contrast, do without any form of symbolism and appropriate the city for themselves by making their hat out of Onomatopoeia’s emblem.

Not only the inhabitants of the island follow theoretical principles, the fauna does as well: In Charles Avery’s most recent piece, he captures the “Dihedra” (from “dihedral angle,” i.e. the angle between two theoretical plains). Popular as pets and souvenirs, they are attracted by geometrical structures, fluttering around them like schematic butterflies (Dihedra, 2010, installation, 8mm projector and steel construction). Their wings are so delicate that they only have one side and they appear to be the same size from any distance across the world.

Although the islanders regard a precise geographical location of their world as useless, its improbable geography and philosophical range can be comprehended in detail on a meticulously drawn, unfolded World Map (2008).

It is an island archipelago on both – exactly equivalent – sides of the globe, that spans between the two epistemological poles: The truth about the truth is to be found at the South Pole, referencing the basic problem of the correspondence theory that questions the verifiability of “truth,” while there is an endless forest at the North Pole beyond Descartes’ axiom, whereof one cannot speak and, in keeping with Wittgenstein’s seventh proposition, must therefore be silent.

Between them, there are places with charged associative names such as the island called The Causality of Effect or the Bay of Senility. Via the Sea of Clarity, sea voyagers reach The Memory of Familiarity, an inland water on the shore of which Onomatopoeia is located.

Despite the meticulousness with which Charles Avery formulates his cosmos, he does without a plot that would recapitulate the world in any epic narrative: The island world is a theoretical playground that invites the viewers to think one step further and equip with their own stories – or to look on from the edge and wonder if there really is an island at all.

The exhibition “Onomatopoeia” has been organized in cooperation with Le Plateau / Frac Ile-de-France, Paris, and Ex3 Centro per l’arte contemporanea, Florence.