Through African Eyes at The Nelson-Atkins Museum of Art (Kansas City, USA) 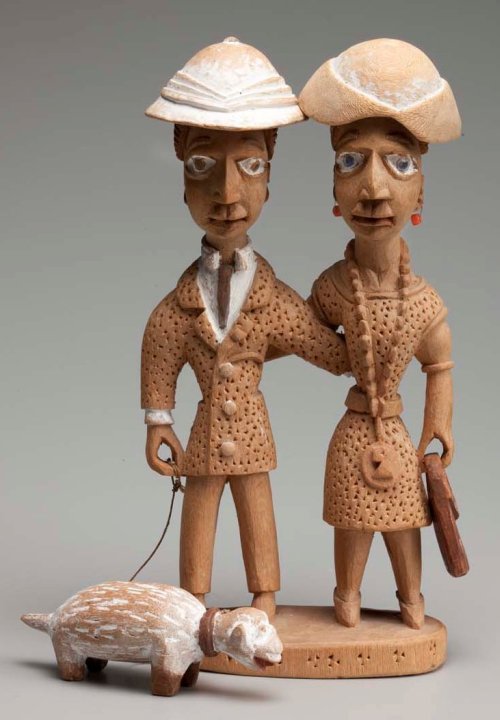 A groundbreaking visual examination of how African artists expressed the dynamic interactions between African cultures and Europeans and Westerners will open Sept. 25 at The Nelson-Atkins Museum of Art. Through African Eyes: The European in African Art, 1500–Present, on view through Jan. 9, 2011, will feature 95 works of art exploring 500 years of contact.

The exhibition, which debuted this past spring at the Detroit Institute of Arts (DIA), is the first to give a wide perspective of the African point of view of Europeans, from first encounters and trade relations, to European settlements and colonization, through the contemporary years of post-independence. Sculptures, masks, utilitarian objects, textiles, photographs and paintings lent from more than 30 museums, institutions and collections give a riveting visual commentary on artistic perceptions from more than 20 African countries.

“These works express an incredible diversity of response to white people, spanning the gamut of emotion from admiration to resentment,” said Leesa Fanning, associate curator, Modern & Contemporary Art, at the Nelson-Atkins, who served as curator for the Kansas City venue.

The exhibition was initiated and curated by Nii Quarcoopome, who leads the Department of Africa, Oceania and Indigenous Americas at DIA. As a child in the 1960s in Ghana, he witnessed first-hand the complex relationships between Africans and white Europeans and Americans.

“At the heart of the exhibition and its accompanying catalogue is the desire to give agency to African voices; indeed, the title, Through African Eyes, primarily obtains from this thinking,” he said. “After all, what good is African art and history without the African voice?”

The works of art generally take three forms. First are the portraits of specific Europeans or images that represent a particular moment in time; next are images of white people as a metaphor or allusion to authority, power, brutality, wealth, literacy, etc.; and finally, there are utilitarian objects that Africans used to denote European or Western culture, such as guns, books and eyeglasses.

“At first, because Africans encountered Europeans only as occasional visitors to their communities, white people remained exotic characters,” Quarcoopome wrote in the catalogue. “But once Europeans decided to settle among Africans, African attitudes changed toward them as a people and culture. Increased familiarity eroded much of the initial fascination and enabled Africans to more fully assess the racial and cultural differences.”

The exhibition is organized in seven sections:

Strangers and Spirits: Histories passed down through generations of Africans tell of various reactions to first meetings with Europeans. The arrival of the Portuguese around 1450 created a sensation. In many African cultures, whiteness is traditionally associated with the supernatural and spirits. African sculptures with white pigment surfaces are instantly recognized by Africans as representing spirits. With their pale skin, the Portuguese were first thought to be supernatural beings. This sculpture represents an ancestor spirit. It was used as a grave marker and it functioned as a mediator between the living and the dead. The figure has filed teeth characteristic of Yombe peoples but wears European-style clothes.

Traders: Direct partnerships between Portuguese traders and African kingdoms resulted in a long-lasting impact on African arts and cultures. African artists incorporated European imagery, imported materials and goods. Objects in this section show the European as a trader of goods and slaves–lucrative for some, destructive for others.

Settlers: Although European settlers lived apart from their African neighbors, Africans observed them closely. These works reveal the results of those observations, such as the sculpture of the couple walking their dog (first page of release) by the Yoruba artist Thomas Ona Odulate, who documented colonial life in his carvings. In African culture, dogs perform functional roles, such as hunting and providing protection. With this sculpture, the artist makes a commentary on the European lifestyle – dog walking as a leisure activity – and represents an African stereotype of European culture in which love for dogs trumps that for humans.

Spirituality and Technology: Africans usually admired and welcomed European technologies. Artists here reflect the desire to own or be associated with European technology, but also express caution about its use. This work, Fantasy Coffin, a sculpture of a Mercedes Benz from 1996 by the Ghanaian artist Ben Kane Kwei, would have been commissioned to celebrate a life of wealth and achievement, provide an elegant ride for the deceased in the afterlife and fulfill the lifetime fantasy of owning such a car.

Education: The introduction of Western teachings created tensions within African societies, and many Africans saw access to Western education as a way to influence and resist European ways of understanding the world.

Colonizers: In the late 1800s representatives from 12 European countries divided Africa into colonies and established themselves as masters. Works here reveal how African artists expressed their attitudes toward colonizers from resistance to alignment. Between the 1950s and 1960s, as Africa’s boundaries were redrawn and independent nations appeared, artists created works of art reflecting on the era of colonization with feelings that ranged from deeply critical to nostalgic.
This image of Queen Victoria depicts the monarch wearing a crown, veil, and long gown, an example of a broad artistic genre that was inspired by colonial photographs, postage stamps, medals and coins.

Westerners: African artistic interpretation of the West continues today. This section features art forms that reflect the ongoing complex interaction with the world.