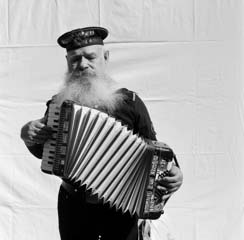 The idea of the project originated in 2006. James Hill, fascinated by the Russian tradition of honouring the veterans of that war, decided to take pictures of them in the Gorky Park during the Victory Day celebrations. The preparations were minimal: a white backdrop was placed on a stand, and the elderly heroes stood there as they were. In 2006, the photographer portrayed women only, as over a million women fought in that war, which was an unprecedented example of women mobilization. Later, James Hill went beyond his initial plan to be limited with women’s portraits and came back to the Gorky Park on May 9 of 2007, 2008 and 2009, creating new series of portraits of women and men alike.