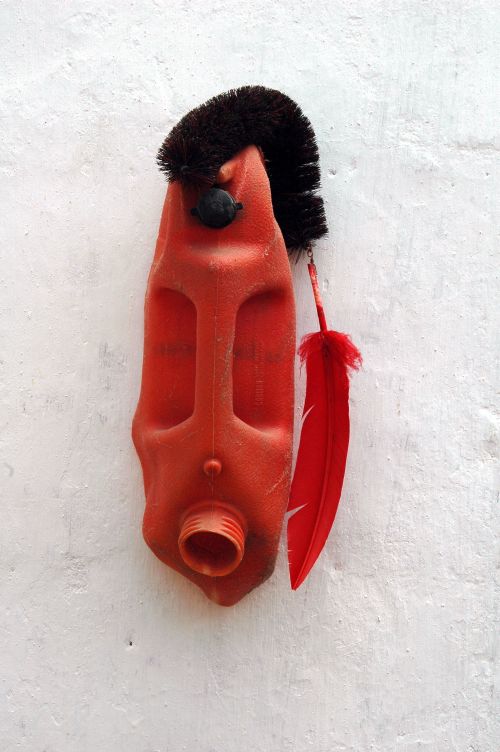 An exhibition of the work of Romuald Hazoumè, one of Africa’s most acclaimed and original artists, opens to the public at the Irish Museum of Modern Art on Wednesday 9 February 2011. Winner of the prestigious Arnold-Bode Prize at documenta 12 in 2007, Hazoumè was born and continues to live in the Republic of Benin and his work is deeply rooted in the culture and traditions of West Africa. His practice also constitutes a powerful commentary on modern-day life in the area and on the West’s outdated perceptions of Africa. The exhibition is the first solo show dedicated to an African artist at IMMA and continues a strand of programming presenting artists from the periphery, whose socially engaged work documents a moment in time in a particular cultural milieu.

Romuald Hazoumè focuses primarily on the artist’s iconic sculptures made from discarded plastic canisters. Ubiquitous in Benin for transporting black-market petrol (known as kpayo) from Nigeria, these jerry cans are expanded over flames to increase their fuel-carry capacity, sometimes to excess resulting in fatal explosions. Hazoumè fashions the cans and other found objects into a series of masks or portraits of everyday African people, from Citoyenne (1997), a broad-faced woman with African-style plaits, to Java Junkie (2003), a relaxed character with long flowing locks. The masks also call to mind Western perceptions of primitivism, as seen in the use of similar motifs in the works of Picasso and Braque in the early 20th century.

Another work formed from jerry cans, MIP – Made in Porto Novo (2009), comprises a quartet of jazz instruments with their own unique accompaniment. This is made up of revving motorbikes, splashing liquid and other noises recorded by the artist over a day spent with his fellow countrymen, the so-called kpayo army, who transport the illegal fuel. These and other works all highlight the presence of multi-national oil companies in West Africa where natural resources are exploited with little benefit to the local communities, a form of neo-colonialism that Hazoumè equates with an unending form of slavery.

Slavery is also one of the themes at the heart of the panoramic photograph, And From There They Leave, 2006, in which we see a group of boys with their canoe on an idyllic beach. The subtext is that this is the area from which slave ships set sail in vast numbers from the late 15th to the early 19th centuries. Today Benin is still a country where economic circumstances force people to leave their homeland, continuing a long history of poverty and exploitation for most of its citizens.

The four painting in the exhibition are also integral to Hazoumè’s practice and again bring together the traditional and the modern. Acrylic paints are used to delineate the foreground from the background, echoing an old West-African mural technique which employed ochre and cow dung to achieve the same effect. In addition, the symbols used relate to Ifá, an ancient literary, divinatory and philosophical system used by the Yoruba people, the tribe to which Hazoumè belongs.

Romuald Hazoumè was born in 1962 in Porto Novo, Republic of Benin. His work has won widespread critical acclaim and has been shown widely internationally over the past 20 years. His major installation, La Bouche du Roi, a re-creation of a slave ship made from petrol canisters, was shown at the British Museum, London, in 2007 to commemorate the bi-centenary of the British Parliament’s abolition of the slave trade. The work was also shown at the Menil Collection, Houston, and the Musée Quai Branly, Paris. He participated in 100% Afrique at the Guggenheim Bilbao in 2006-07 and in Uncomfortable Truths, which addressed the ways in which the legacy of slavery informs contemporary art and design, at the Victoria & Albert Museum, London, in 2007, again organised to mark the abolition of the British slave trade.

Romuald Hazoumè is curated by Enrique Juncosa, Director, IMMA, and Seán Kissane, Head of Exhibitions, and is accompanied by a fully-illustrated catalogue published by IMMA with texts by Seán Kissane, Gerald Houghton, Director of Special Projects, October Gallery, London; Yacouba Konaté, curator, writer, art critic and Professor of Philosophy at the University of Cocody in Abidjan, Ivory Coast; and André Magnin, Artistic Director of the Contemporary African Art Collection in Geneva, and a foreword by Enrique Juncosa.

The exhibition is organised by IMMA and will travel to the Oriel Mostyn Gallery, Llandudno, Wales.