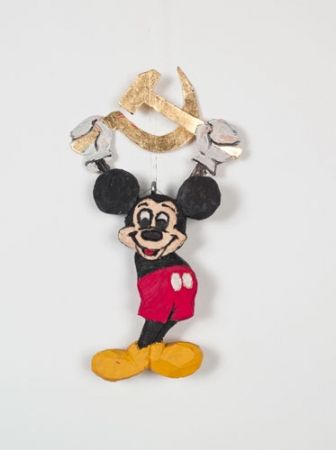 The exhibition at the Moscow Museum of Modern Art for the first time in Russia offers an unprecedented personal retrospective of a well-known master of the ‘Soviet Pop Art’, or Sots Art, presenting works from the 70ies and up to the present days. The display includes over 120 works by the artist and is divided into 9 sections, gradually presenting the development and metamorphoses of Leonid Sokov`s signature artistic and symbolic language.

Sokov`s name is tightly linked with the conception and development of the Sots Art movement, which inspires Russian artists for many decades starting from the early 70s. Developing as a reaction against the aesthetical paradigm of Academic art and the doctrine of Socialist Realism, as well as the regime at large, the strategies of ‘non-official’ art, implicated the critical revision of the cliches formed in the national collective imagination and ideology along with the shattering of the existing political order. The members of Sots Art movement, who associated themselves with this creed, followed it through ironical participation in parodying cultural artefacts, which due to their simplicity, intentional roughness and eclecticism for a long time weren`t considered art even among modernists. Sots-art proposed an alternative not only to Socialist Realism but also to the classical modernism and the succeeding movements of the liberal «underground» Russian art of the 1960s. Sokov`s works vividly demonstrate the characteristic features and techniques of the so-called «second avant-garde» that sprung up in various centers of contemporary culture all over the world defined as «postmodernism».

Being a typical postmodernist Sokov brings together the derivatives of modern civilization such as everyday objects, sacred symbols, fasces, mass-media images and the elements of classical world art, folk motifs, pagan idols and artifacts.

Sokov`s famous sculptural signs dialogues became the trademark of Sots Art. The artist puts face to face various representations of Soviet and «Western» civilizations. The encounters of Marilyn Monroe and Stalin, Giacometti`s «Walking Man» and a typical monument of Lenin, folk wooden toys and imperial fasces within the space of one artwork reveal the geopolitical conflict of cultures of the 20th century, the polarized perception and «doublethinking» of a modern man no matter which political systems he considers himself being a part of.

Sacred objects like depictions of political leaders, heraldic state symbols, classical art masterpieces are presented in Sokov`s work with a perspective that unfailingly makes the spectator shriek with laughter. The element of humor allows the audience to see the world in a different dimension, for a short time liberating people from subservience of authorities and cults. Leonid Sokov`s art praises playful popular nihilism, manifested in anecdotes and jokes, toys and folklore, and elevates it to the level of national cultural tradition.

The present show will feature all artist’s most famous artworks and series from various important public collections such as The Freedman Gallery (Albright College), Jane Voorhees Zimmerli Art Museum, Galleria Mazzoli, The State Tretyakov Gallery, The Cultural Foundation «Ekaterina», and private collections in Russia, the USA and Europe as well as less known pieces from the artist`s studio, including a range of his paintings rarely exhibited in Russia and beyond.