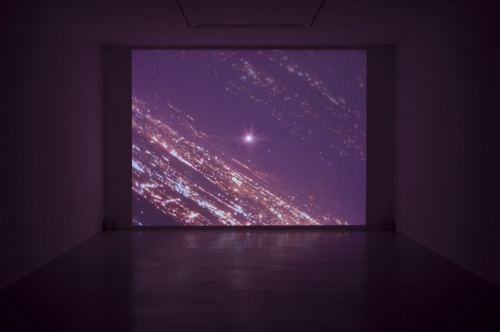 On display on the gallery’s groundfloor, will be three new series of drawings made of graphite, silver and melted tin, new photo works and two new video projections. For Toderi the drawings are a vital first step in the preparatory process of making new video works.

All the works in the exhibition have the same title: “Orbite Rosse”. Back in 1998, the artist already showed a double video projection called “Orbite” in the gallery. In Toderi’s work references to orbits have been constant ever since the beginning of her career: be it the moon that moves around the Earth, the planets that move around the sun, satellites or spaceships that move around planets, or even a football inside a stadium, or the movements of a spinning top on a pavement.

The meaning of the word ”orbit” expands as also the two cavities in our head, with which we construct our image of the world are considered to be orbits. Even traditional representations of the world in cartographies are depicted by two flattened globes, hence orbits.

The other constant element in Grazia Toderi’s work is light: the reason why the artist has chosen to make videos and project them is because videos are made out of light, light that becomes apparent when it hits a surface. The video is also a medium that can potentially be broadcasted, through the light itself, simultaneously all over the world.

Last but certainly not least, “Orbite Rosse” is also a reference to the colour of citylights seen by night and from above, and a reference to the undefinable reddish colour that appears when we have our eyelids closed while facing the light – an outside world and an inside world.

In 2009, Grazia Toderi participated in the 53rd Venice Biennial “Fare Mondi” (curated by Daniel Birnbaum). It has been her third Biennale di Venezia – after 1999 and 1993. At the 48th Venice Biennial “dAPPERTutto” in 1999 (curated by Harald Szeemann) Toderi won the Golden Lion for her presentation in the Italian Pavilion.