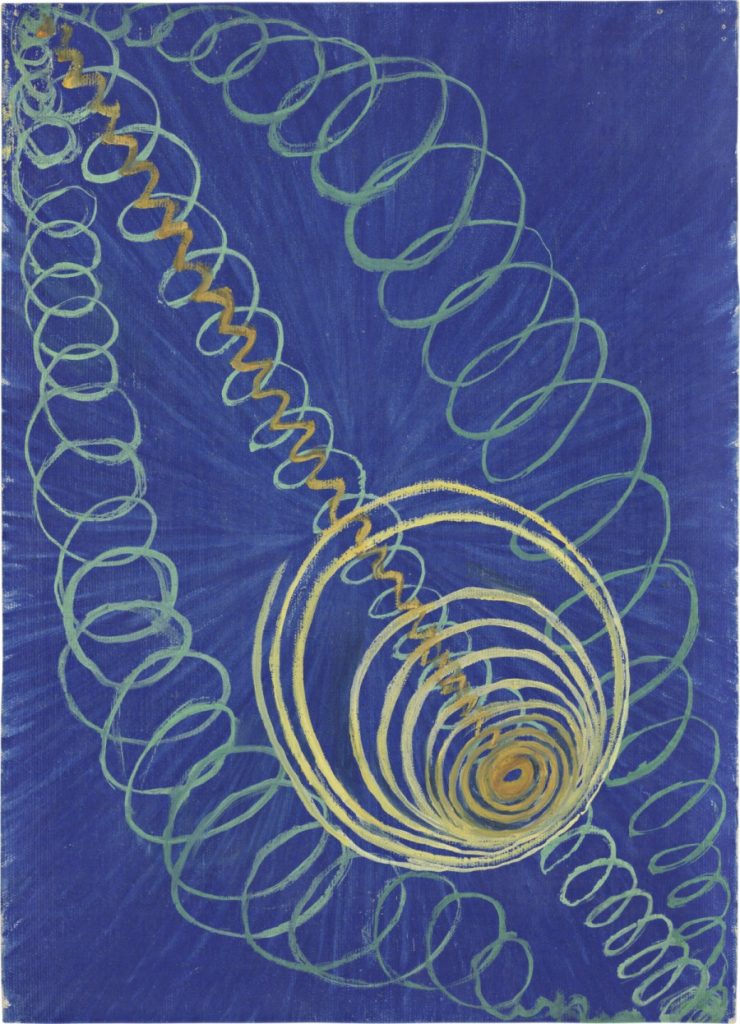 When af Klint began creating radically abstract paintings in 1906, they were like little that had been seen before: bold, colorful, and untethered from recognizable references to the physical world. It was several years before Vasily Kandinsky, Kazimir Malevich, Piet Mondrian, and others would take similar strides to free their own artwork of representational content. Yet af Klint never exhibited her remarkably forward-looking paintings and, convinced the world was not ready for them, stipulated that they not be shown for 20 years following her death. Ultimately, her work was not exhibited until 1986, and it is only over the past three decades that her paintings and works on paper have received serious attention.

Hilma af Klint: Paintings for the Future will offer an opportunity to experience af Klint’s artistic achievements in the Guggenheim’s rotunda more than a century after she began her daring work. Curated by Tracey Bashkoff, Director of Collections and Senior Curator, with the assistance of David Horowitz, Curatorial Assistant, and organized with the cooperation of the Hilma af Klint Foundation, Stockholm, the exhibition will feature more than 160 of af Klint’s artworks and focus on the artist’s breakthrough years, 1906–20. It is during this period that she began to produce nonobjective and stunningly imaginative paintings, creating a singular body of work that invites a reevaluation of modernism and its development.

In conjunction with Hilma af Klint: Paintings for the Future, the museum will present the 34th chapter of paintings by R. H. Quaytman, whose abiding interest in af Klint extends back to 1989, when Quaytman organized an exhibition on the Swedish artist at New York’s P.S.1 Contemporary Art Center. In these new works, Quaytman will engage af Klint’s aesthetic language and spiritually charged subject matter, reexamining both through the lens of the Guggenheim Museum’s founding ethos, which was indebted to the art and theories of Kandinsky and culminated with commissioning Frank Lloyd Wright to design “a temple of the spirit.”

Hilma af Klint was born in Stockholm in 1862 and went on to study painting at the city’s Royal Academy of Fine Arts, graduating with honors in 1887. She soon established herself as a respected painter in Stockholm, exhibiting deftly rendered figurative paintings and serving briefly as secretary of the Society for Swedish Women Artists. During these years, she also became deeply engaged with spiritualism, Rosicrucianism, and Theosophy. These forms of spirituality, which were also of keen interest to other artists, including Kandinsky, František Kupka, Malevich, and Mondrian, were widely popular across Europe and the United States, as people sought to reconcile long-held religious beliefs with scientific advances and a new awareness of the global plurality of religions.

Af Klint developed her new approach to art making together with her spiritual practice, outside of Stockholm’s male-dominated art world. She had begun to regularly hold séances with four other women by 1896. During a meeting in 1906, one of the spirits that the group often channeled asked af Klint to create a cycle of paintings. Af Klint immediately accepted. She worked on the project between 1906 and 1915, completing 193 paintings and works on paper collectively called The Paintings for the Temple. These works, which included her first forays into nonobjectivity, were a radical break from the more staid paintings she produced as part of her public practice. Stylistically, they are strikingly diverse, utilizing biomorphic and geometric forms, expansive and intimate scales, and maximalist and reductivist approaches to composition and color. She imagined installing them in a spiral temple, but the building never came to fruition. After she completed The Paintings for the Temple, af Klint continued to test the limits of her new abstract vocabulary. In these years, she experimented with form, theme, and seriality, creating some of her most incisive works.