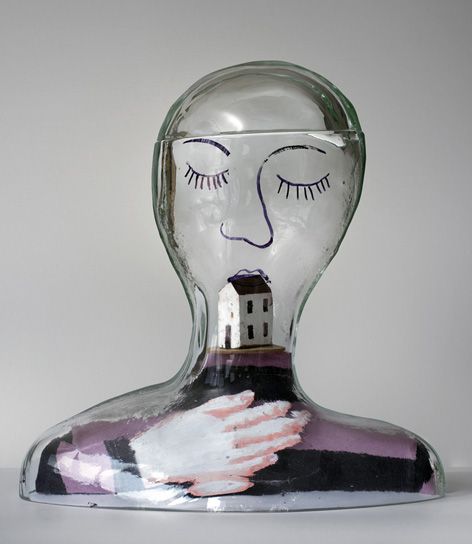 THEM is the third key exhibition of Viktor Pivovarov in Moscow. The first one, Steps of a Mechanic, took place in 2004 at the Tretyakov Gallery and the Russian Museum; the second one, Lemon Eaters, was hosted by the Moscow Museum of Modern Art (Ermolaevsky Lane building) in 2006. The new exhibition, THEM, is presented again at the Moscow Museum of Modern Art, in the Gogolevsky Boulevard building. As were the previous ones, this project is prepared in partnership with XL Gallery.

Viktor Pivovarov (b. 1937), just like Dmitry Alexandrovich Prigov, Ilya Kabakov, Vitaly Komar and Alexander Melamid, represents the older generation of the so-called ‘founding fathers’ of Moscow conceptualist school and, just like Eric Bulatov and Oleg Vassiliev, Pivovarov stands well beyond its limits. Being a truly radical romantic, Viktor Pivovarov has a special place among Moscow romantic conceptualists, as Boris Groys called them.

Viktor Pivovarov’s new exhibition is entitled ‘THEM’. THEY are themes, images, heroes, and ideas born in the artist’s mind; they are embodied in the creative process and continue their independent lives in the space of culture.

But for some exceptions, the project displays works that the artist created during almost five years that passed since his last Moscow show, Lemon Eaters. The current exhibition comprises ten independent cycles, each having its own detached space: ‘Melancholics’, ‘Hermits’, ‘The Chosen Ones, or Time of the ROSE’, ‘The Glassy Ones’, ‘The Perfect Ones’, ‘Handsome Men’, ‘Milena and the Spirits’, ‘Philosophers, or Russian Nights’, ‘Immortals’. The 2010 album entitled ‘They Are Back!’ concludes the exhibition.

Four cross-cutting themes pierce the whole career of the artist. The first one is the theme of Moscow (previous exhibitions revealed it in ‘Apartment 22’ cycle, the Moscow poem ‘Lemon Eaters’, ‘Cast of Characters’ album, etc.). In THEM exhibition, this theme appears in the very beginning – in the poem that opens the display, as well as in ‘Philosophers, or Russian Nights’ cycle of portraits, and in ‘They Are Back!’ final album. The second theme – that of childhood – is strongly linked to the image of post-war Moscow, that dark ‘snow-covered city’ seen in ‘Melancholics’ and ‘The Chosen Ones’ cycles.

The third theme is that of loneliness. As is well known, Viktor Pivovarov is the author of the classical (now we can already call it that way) conceptual cycle of 1975 entitled ‘Projects for a Lonely Man’. In the new exhibition, the loneliness theme is present in ‘Hermits’ cycle of pen drawings. In his earlier works, Pivovarov interpreted loneliness as a dramatic existential problem, whereas ‘Hermits’ cycle presents it as a sort of spiritual practice, spiritual deeds and austerity.

The fourth theme refers to sanctity. Within the exhibition, it unfolds in different aspects, starting from childish ‘sacral game’ in ‘Time of the ROSE’ cycle, via ‘transcendent presence’ in ‘The Perfect Ones’ cycle of paintings, to the quest of absolutely pure forms in ‘Eidoi with Attributes’ and ‘Eidetic Landscapes’ series.

‘Handsome Men’ paintings are sharply opposed to the sacral theme. Here man and Eros appear in their low-pitched, physical, and grotesquely animal nature, rather than the higher celestial one (as in ‘They Are Back!’ album).

A special place in the exhibition belongs to the series of portraits entitled ‘Philosophers, or Russian Nights’. The artist understands philosophy in its original meaning, as love of wisdom. That is why here, apart from portraits of the so-called ‘professional’ philosophers such as Alexander Pyatigorsky and Merab Mamardashvili, one can find images of poet Igor Kholin, visionary Daniil Andreev, poet and political activist Eduard Limonov, and writer Vladimir Sorokin. These are portraits of people who have created and still create the inimitable spiritual ambience of Russian and Moscow culture.

Viktor Pivovarov’s radical romanticism lies, apart from other things, in his firm belief in the fact that, even in the new IT civilization, ideas and images of the old classic culture are omnipresent – they are still relevant to our formation.