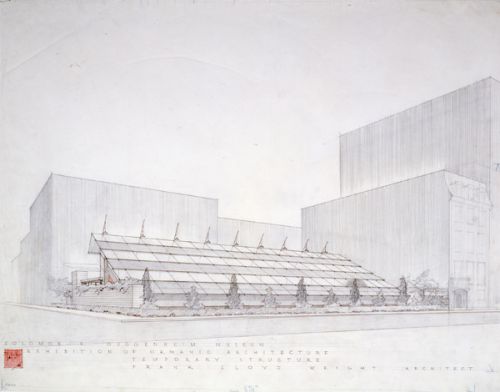 In 1953, six years before the Frank Lloyd Wright-designed Solomon R. Guggenheim Museum opened to the public, two of his structures—a pavilion and model Usonian house—were built on the future site of the museum to house a temporary exhibition displaying the architect’s lifelong work. From July 27, 2012, to February 13, 2013, the Sackler Center for Arts Education at the Guggenheim Museum will present A Long-Awaited Tribute: Frank Lloyd Wright’s Usonian House and Pavilion, an exhibition comprised of selected materials from the Solomon R. Guggenheim Museum Archives, highlighting the first Wright buildings erected in New York City.

This exhibition is organized by Francine Snyder, Director of Library and Archives, Solomon R. Guggenheim Museum.

Constructed to adjoin the museum, then located in a townhouse on Fifth Avenue near East 88th Street, Wright’s temporary pavilion was made of glass, fiberboard, and pipe columns, measuring 145 feet long and covering nearly 10,000 square feet with a roof that was over 20 feet at its peaked ridge. Inside the pavilion, a traveling exhibition entitled Sixty Years of Living Architecture: The Work of Frank Lloyd Wright featured sixteen models of Wright’s renowned buildings, accompanied by photographs, floor plans, and drawings. Also featured with the exhibition was a full-scale model of Wright’s Usonian house, built to the northeast of the pavilion and accessible through a courtyard and garden. The 1,700-square-foot, fully furnished, two-bedroom house represented a concept first developed by Wright in the mid-1930s, during the midst of the economic depression. The modest, distinctively American, middle-class dwelling featured seven rooms that were fully equipped with everything from pots and pans to cosmetics. Additionally, the model Usonian house was outfitted with furniture designed by Wright and decorated with various artworks, including mobiles created by Alexander Calder. The two structures, whose construction was organized by Wright, the Solomon R. Guggenheim Museum’s second director James Johnson Sweeney, and former Solomon R. Guggenheim Foundation president Harry Guggenheim, were open to the public from October 22 to December 13, 1953, after which they were disassembled in early 1954. Aware of his lack of architectural recognition in New York City prior to the opening of the Solomon R. Guggenheim Museum in 1959, Wright declared: “this house and the pavilion alongside it . . . represent a long-awaited tribute: the first Wright building[s] erected in New York City.”

A Long-Awaited Tribute: Frank Lloyd Wright’s Usonian House and Pavilion highlights these two buildings through a rich selection of over thirty archival objects—including correspondence about planning, sketches, blueprints, and a plot model, as well as films with Wright and general contractor David Henken (a former apprentice at Taliesin, Wright’s estate, and founding member of the planned community Usonia, located in Mount Pleasant, New York), depicting the construction site and views of the models in the pavilion. Newspaper and magazine clippings give a sense of the public reception of Wright’s buildings, and several photographs range from documentation of construction—Wright and Henken reviewing architectural drawings or Taliesin apprentices on-site—to those taken at the opening of the two buildings, such as crowds at the exhibition and interiors of the Usonian house.