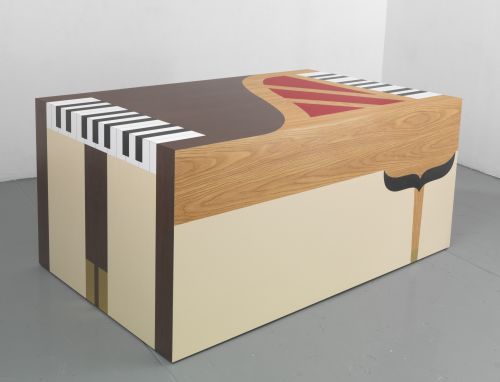 Gagosian Gallery Rome is pleased to announce an exhibition by internationally renowned American artist Richard Artschwager (b. 1923, Washington D.C.). Associated with a number of styles, from Pop and Minimalism to Conceptual Art, Artschwager has escaped categorization by forging a unique and maverick path in twentieth century art and confounding its generic limits, all the while making the visual comprehension of space and the everyday objects that occupy it strangely unfamiliar.
The exhibition in Rome presents a group of new sculptures made of Formica, one of Artschwager’s signature materials. Artschwager’s work has been the subject of many important surveys, including the Whitney Museum of American Art, New York and Centre Pompidou, Paris, and his work is included in many museum collections worldwide, including the Art Institute of Chicago, Museum Ludwig Cologne, and Fondation Cartier, Paris. The exhibition presented at Gagosian Rome precedes a major museum retrospective of Artschwager’s work opening at Whitney Museum in New York in October 2012.