The twelfth edition of Master Drawings London is taking place between 27 June-5 July 2012. The dates have been brought forward to better reflect the material shown during the week, while also coinciding with the 20th century auctions that take place at the end of June, as well as the Old Master sales which happen during the first week of July. Leading drawings specialists from London, New York, Düsseldof, Zurich, and Madrid showcase seven centuries of drawings and watercolours from the Renaissance and to the present day. The event takes the form of a series of coordinated exhibitions in dealers’ galleries throughout St. James and Mayfair, providing a platform for leading specialist dealers to show their stock to an international audience. Together with the auction sales, Master Drawings London provides art connoisseurs with a comprehensive overview of the market. 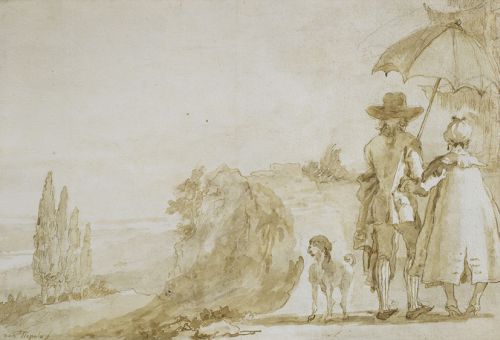 New York participants Hill-Stone are showing a striking work by George Romney (1734-1802) entitled A study for the Figure of Charon, executed in pen and brown ink over black chalk. British art is also on display at Lowell Libson Ltd who has work by the English romantic landscape painters John Constable RA (1776-1837) and Richard Parkes Bonington (1802-1828), two of the most major and influential English landscape painters of the 19th century.

C.G. Boerner is exhibiting a selection of Austrian and German work by artists such as Arthur Georg Freiherr von Ramberg (1819-1875), Anton Romako (1832-1889), Othmar Brioschi (1854-1912) and Carl Wagner (1796-1867). Carl Wagner’s watercolour over pencil on wove paper portrays a View of Poschiavo, 1862, which retains an incredible freshness rarely found in watercolours from this period. Nineteenth-century European work can also be seen at Stoppenbach & Delestre Ltd, specialists in French 19th century and 20th century art, who have some colourful seascapes by Raoul Dufy (1877-1953) and Paul Signac (1863-1935). Raoul Dufy painted Voiliers au large de Naples, 1922, while travelling from the South of France down to Sicily, visiting a number of fashionable ports and towns along the way.

Agnew’s has a beautiful pen and wash of a Venetian couple walking in the Rain, signed by Domenico Tiepolo (1727-1804). In the middle of the 18th century, the Venetian nobility and bourgeoisie would leave the heat of the city in summer for the Veneto.
The Tiepolo family owned a villa at Zianigo from which this scene was no doubt painted. The spacious composition conveys the peace and quiet of the countryside far from the heat and bustle of the city.

Stephen Ongpin is showing a work by Picasso (1881-1973), one of the greatest and most influential artists of the 20th century. Nude Combing her Hair (Femme nue se coiffant) was painted in 1906 during Picasso’s late Rose period, clearly seen in its red ink and wash. During the first half of 1906, Picasso and his mistress Fernande Olivier spent several weeks in a remote mountain village in the Pyrenées where he produced a number of large canvases of Fernande Olivier combing or arranging her long red hair. Another large and powerful drawing visitors can expect to see is Mother and Children (After the Leonardo Cartoon) by contemporary British painter Jenny Saville (born 1970), who is associated with the Young British Artists. Contemporary art is also on show at Day & Faber who are exhibiting work by Dave Winthrop (born 1948), an artist who began his career as a saxophonist for Supertramp, though throughout this time compulsively filled sketch books. He now concentrates on developing the imagery to construct his own personal universe resulting in his own unique and intricate artwork.

For the very first time this year Master Drawings London week is hosting a lecture entitled ‘First of all respect your paper: 500 years of artists and their papers’ at The Society of Antiquaries of London on Thursday 28 June at 10 am. Peter Bower, forensic paper historian and paper analyst, who specialises in the examination and analysis of papers for purposes of dating, attribution, authentication and usage is speaking.
Peter has written many reports and consultation documents on papers used in works of art, banknotes, bonds and books, as well as publishing two books on Turner’s papers.