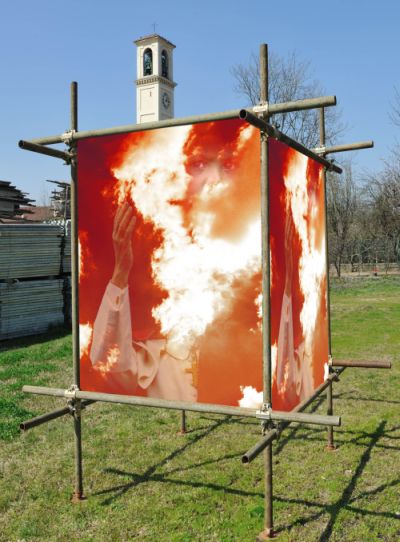 The fourteenth edition of OPEN, the International Exhibition of Sculptures and Installations will be held at Venice Lido and San Servolo Island. from September 1st to October 2nd, 2011, in conjunction with the 68th Venice Film Festival.

At this venue the Milanese photographer Marina Gavazzi is presenting an installation built from iron scaffolding tubes taken from an abandoned building site. It is a cube with, on each side, the same image named His Holiness representing the Pontiff enveloped in flames under the innocent look of an adolescent boy. The strength of the iron which acts as frame to the image is meant to reinforce the unequivocal message denouncing the decennia of sexual abuses perpetrated by Roman Catholic priests on young innocent souls whom the unsuspecting families had entrusted in their care. These crimes were well known to the recently beatified highest authority of the Vatican, but, in conjunction with his current successor, he nevertheless tried to cover them up until the scandal reached a level where it was impossible to contain.

For too long the Church has only tried to protect itself, with total disregard for the thousands of innocent victims who will continue for the remainder of their lives to bear the moral stigmas of the abuses suffered. Only in the United States more than 5,000 priests (including 16 bishops and archbishops) have been accused of sexual abuse from the 1950’s to the current days. The number of their victims is estimated to be in excess of 150,000, as a result of the fact that each paedophile priest abused more than one victim, in one well publicised case in Massachusetts a priest admitted to having used violence on over 100 children of both sexes. The vastness of the phenomenon was well known at the Vatican since the middle of the 1980’s, but until the scandal erupted at the beginning of the new millennium the Church tried with all possible means to avoid that the terrible truth surfaced, for example moving the accused priests to other parishes or even to other countries, to make sure that they evaded ordinary justice. In many cases the same priests continued to use sexual violence on new unaware victims, thus increasing the responsibility of those who, in order to protect the Church’s reputation, decided not to bring these crimes out in the open.

The artist wants to share this accusation with all those who have not lost the respect for the human being, and who oppose with all means the bigotry of a Church that is ethically corrupt, far away from the real needs of the people. The Church has to return to its origins, to the institution that Christ created, close to mankind in the good times and in the times of need.

The artists’ works at Venice Lido and san Servolo Island are not tied to a specific theme, but to a communicative code that the artists express in absolute freedom. An urban walkway which is transformed in an artistic journey where the passer-by is immerged in an everyday environment that is exploited by the presence of an artistic context.

Curator of the event is Paolo De Grandis, together with Carlotta Scarpa, and the exhibition is organized by Arte Communications together with the City of Venice Cultural Affairs Office and with the support of the Italian Ministry of Culture, the Veneto Region, the Province of Venice, and the Comune of Venice. The event has in addition been supported in a curator role by Gloria Vallese, Christos Savvidis, Chang Tsong-zung and Ebadur Rahman.