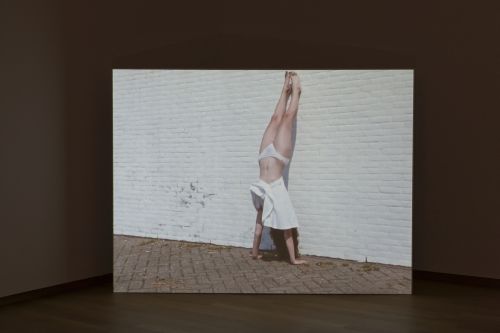 Marijke van Warmerdam’s works have been shown around the world, from Venice to New York and from Sydney to Basel. This autumn Museum Boijmans Van Beuningen presents a major retrospective of her work curated by Jan Debbaut, former director of collections at Tate in London. This is the first large exhibition of Marijke van Warmerdam’s work in the Netherlands in ten years.

Marijke van Warmerdam (1959) is part of a generation of artists from around the world who have explored the potential of film as an artistic medium. Since the 1990s she has created a filmic oeuvre comprising various media: film, photography, sculpture, installations and, recently, painting. For Museum Boijmans Van Beuningen the artist has made a selection from her oeuvre together with Jan Debbaut.

Frozen poetry
Sustaining a moment in time, for example in film loops or in circular camera movements, is a central concern in the work of Marijke van Warmerdam. This freezing of time and space can be seen in her 16mm and 35mm films such as ‘Handstand’ (1992), ‘Skytypers’ (1997), ‘Le retour du chapeau’ (1998) and ‘In the distance’ (2010). She often chooses everyday subject matter such as cycling with no hands, a floating feather, aeroplane exhaust against a blue sky or a girl doing a handstand. Most of her films have no sound. Marijke van Warmerdam does not tell stories in her works but relies upon the visual power of the motif. Marijke van Warmerdam’s work has been described as ‘light yet sharp’ and ‘purely visual’.

Biography
Marijke van Warmerdam lives and works in Amsterdam and Karlsruhe. Her work has been included in many important international exhibitions including the biennales in Venice, Sydney, Berlin and Gwangju and Documenta X in Kassel. She has exhibited several times at Art Unlimited during Art Basel. She has had retrospective exhibitions at the Van Abbemuseum in Eindhoven, the Migros Museum in Zurich, the ICA in Boston, MuHKA in Antwerp and recently at the Fruitmarket in Edinburgh and IKON in Birmingham. Her work is represented in numerous international collections including the Centre Georges Pompidou in Paris, the Stedelijk Museum in Amsterdam and latterly in Museum Boijmans Van Beuningen.