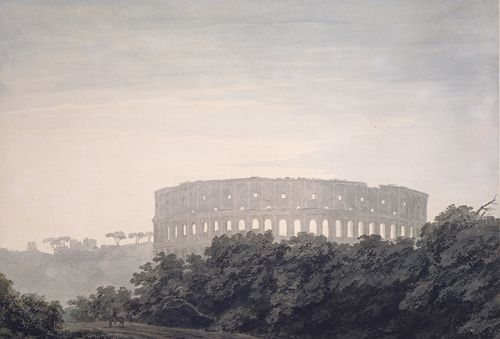 Amongst the highlights in the exhibition is God Writing upon the Tables of the Convenant, pen and ink and watercolour by William Blake (1757-1827), which is one of eighty watercolours of Biblical subjects produced between 1800 and 1809 for Thomas Butts, a military clerk, who shared his philosophies and whose son Blake taught to engrave. The subject of this magnificent watercolour was inspired by an episode in the Old Testament Book of Deuteronomy. Flames and trumpeting angels frame the statuesque figure of God who is seen from behind. Towering over the kneeling Moses, God raises his arms and prepares to inscribe the Ten Commandments on the stone tablets before him.

The Colosseum from the North, washes of bluegrey watercolour over pencil on paper, by John Robert Cozens (1752-1797) is one of his most beautiful and evocative works. John Robert Cozens and his father, Alexander were amongst the first landscape painters to find and express an emotional response to the inherent drama and poetry of landscape and
their world. The greatest of Cozen’s work derive from his visits to Italy in 1776 and 1782.

A masterly watercolour by John Sell Cotman (1782-1842) entitled A Pool on the river Greta near Rokeby, watercolour over pencil on paper, is one of an exceptional group of watercolours resulting from Cotman’s seminal visit to Rokeby Park in Yorkshire in 1805, which demonstrates his ability to simplify the complex forms of nature into flat decorative patterns
serving to intensify the viewer’s understanding of structure and mass. This watercolour was memorably described by Cotman’s biographer, Sydney Kitson as possessing the timeless air ‘of some dreamland where it is always afternoon’.

Portrait drawings by Thomas Gainsborough (1727-1788) are particularly rare and Portrait of a Man, possibly a Dutch Sea Captain, black and white and coloured chalks on grey prepared paper, is one of his most charming and complete exercises in this genre. Dating from around 1755-1758 it is traditionally identified as being of a Captain of a sailing vessel at Amsterdam.
At this time Gainsborough was based at Ipswich, which enjoyed a thriving trade with The Netherlands. This wonderful portrait is notable for its robust characterisation as well as the fluency of its draughtsmanship.

Of the exhibition, Lowell Libson said, ‘In making the selection for this exhibition we decided to concentrate on borrowing a group of works of real beauty and significance, which will give pleasure to the visitor as well as highlighting the overall importance of the collection.
Christopher Baker’s comprehensive catalogue of the collection serves to underline the breadth and depth of the holding of English drawings at Edinburgh.’