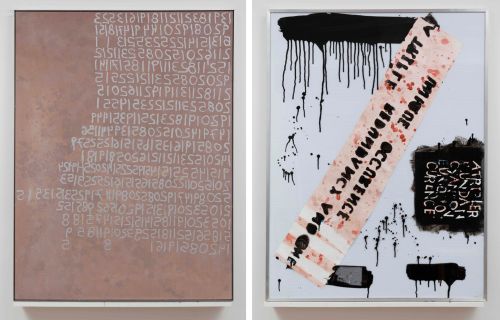 Luce Gallery is pleased to announce a descending bolt (paused) a new project by American artist Dashiell Manley. This is the artist’s first exhibition in Italy and with the gallery.
A falling bolt (paused) is the first part of a larger body of work that serves as a platform to reconsider ideas around narrative structure, production, and the way in which an object meaning is inherently tied to the nature of its production. The exhibition takes the suspended curtain (or part one), a three-channel video projection as its starting point. While at first appearing to be identical, the three projections slowly reveal themselves to be subtlety unique. Comprised of similar material elements (images of text, glass etc.) each channel attempts to copy the prior. With an original and two subsequent copies, it is unclear which projection came first thereby subverting any notion of originality from image to image.
A suite of double sided panels appear at first glance to be paintings. The works slowly reveal themselves as constructions comprised of materials used in the production of the video installation. Deeply rooted in both the history of painting as well as assemblage, the works ultimately emerge as sculptures and engage with the confines of the architectural space in which they exist. Framed by the video installation they were once a part of, a tension erupts between the two simultaneous practices creating a temporal dilemma; painting-like objects that deny the stillness of a painting, and moving image works that attempt to be motionless.