Cast in Bronze: French Sculpture from Renaissance to Revolution 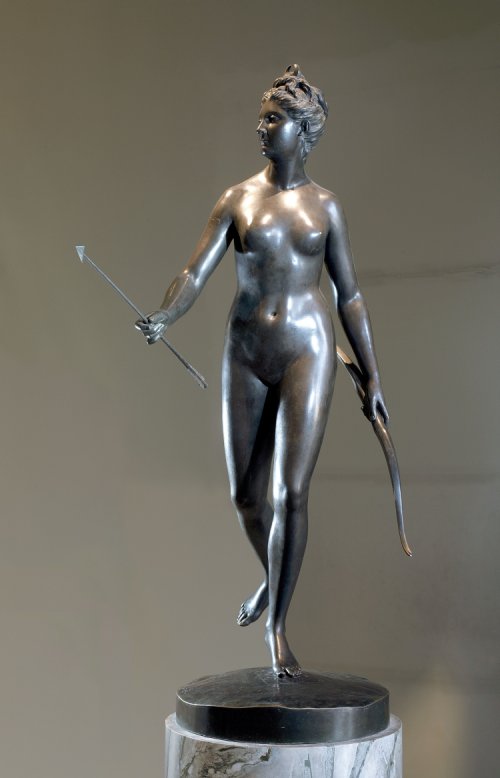 [ad#lb]
Beginning in the 16th century, a tradition of bronze sculpture developed in France that was influenced by achievements of the Italian Renaissance, while manifesting its own distinct refinement and force. Even though French bronzes were among the glories of royal châteaux, including Versailles, and were collected eagerly by connoisseurs, they have received relatively little scrutiny from scholars. Cast in Bronze: French Sculpture from Renaissance to Revolution, on view at The Metropolitan Museum of Art, brings together a large number of spectacular bronzes and is the first exhibition to address this subject in 40 years.

Approximately 125 of the finest statuettes, portrait busts, and monuments reveal the French genius for bronze from the late Renaissance through the times of Louis XIV, Louis XV, and Louis XVI. Jean Goujon, Germain Pilon, Barthélemy Prieur, Pierre I. Biard, Michel Anguier, François Girardon, Antoine Coysevox, Jean-Baptiste Pigalle, and Jean-Antoine Houdon are among the masters featured in the exhibition who lent their prodigious talents to the medium.

The exhibition is made possible by the Iris and B. Gerald Cantor Foundation.

The exhibition was organized by The Metropolitan Museum of Art, New York, the Musée du Louvre, Paris, and the J. Paul Getty Museum, Los Angeles.

It is supported by an indemnity from the Federal Council on the Arts and the Humanities.

Evolving from a decade-long collaborative study by curators and other scholars, Cast in Bronze: French Sculpture from Renaissance to Revolution is the first exhibition in a museum to display this rich array of achievements spanning the Renaissance to the Age of Enlightenment. It features works from spectacular collections, including, most generously, the Musée du Louvre; the Royal Collection, Windsor Castle; the museums of Dresden; and many provincial museums of France. Many of the works in the exhibition have rarely been seen in the United States.

Cast in Bronze: French Sculpture from Renaissance to Revolution is divided into periods in which French accomplishments in modeling, casting, and chasing bronze sculpture, from monuments to statuettes, were most prominent. Mannerist style, inaugurated in the reign of François I, was carried to triumphant heights under Henry II. The reign of Henri IV witnessed the formation of a robust Baroque style that crystallized during the rule of Louis XIV, the Sun King, whose rule is gloriously reflected in a series of masterpieces. In the 18th century, a new and highly attractive rationalism developed during the reigns of Louis XV and Louis XVI. Many bronzes made for the French crown were melted down during political upheavals, but canonical works of the Renaissance and later periods survive intact, or in fascinating fragments.

The vast expertise and range of experimentation in composition, workmanship, and detail that sculptors brought to their metal masterworks are on display.
Highlights of the exhibition include Germain Pilon’s relief, the Lamentation over the Dead Christ, Pierre I. Biard’s Fame, Jean Goujon’s Tomb Effigy of André Blondel de Rocquencourt, and Jean-Antoine Houdon’s Diana, all from the Musée du Louvre; Jean-Baptiste Lemoyne’s Louis XV Standing on a Shield Borne by Soldiers, François Dumont’s Prometheus, and Guillaume Coustou’s Julius Caeser from the Royal Collection, Windsor Castle; and François Lespingola’s The Infant Hercules Strangling the Serpent from the Museum Abegg-Stiftung, Switzerland.
Additionally, equestrian statues that were the glory of Louis XIV’s reign are on view.

The geniuses of the age of Louis XV are celebrated in The French Parnassus (Musée National de Versailles), a monumental work that depicts a vertiginous gathering of writers, poets, and artists, topped by Apollo, the Graces, and Pegasus.
The French Parnassus — which was begun by Louis Garnier and completed by Augustin Pajou — is specially installed in the Metropolitan’s Carroll and Milton Petrie European Sculpture Court for the duration of the exhibition.

At the Metropolitan Museum, the exhibition is organized by Ian Wardropper, Iris and B. Gerald Cantor Chairman, and James David Draper, Henry R. Kravis Curator, both of the Department of European Sculpture and Decorative Arts.

Cast in Bronze: French Sculpture from Renaissance to Revolution will be accompanied by a fully illustrated comprehensive catalogue written by a team of international scholars. Published by Somogy Éditions D’Art in both French and English, the catalogue will be available in the Metropolitan Museum’s book shops ($85 hardcover).

A variety of educational programs will accompany the exhibition. Highlights include a Sunday at the Met program on March 8 with lectures by Robert Wenley, Curator of European Art 1600-1800, Burrell Collection, Glasgow, Jonathan Marsden, Deputy Surveyor of The Queen’s Works of Art, The Royal Collection, and Thomas Gaehtgens, director, Getty Research Institute; and “Powerful Portraits,” a full-day teacher workshop on March 8, with instructors Felicia Blum and Edith Watts.