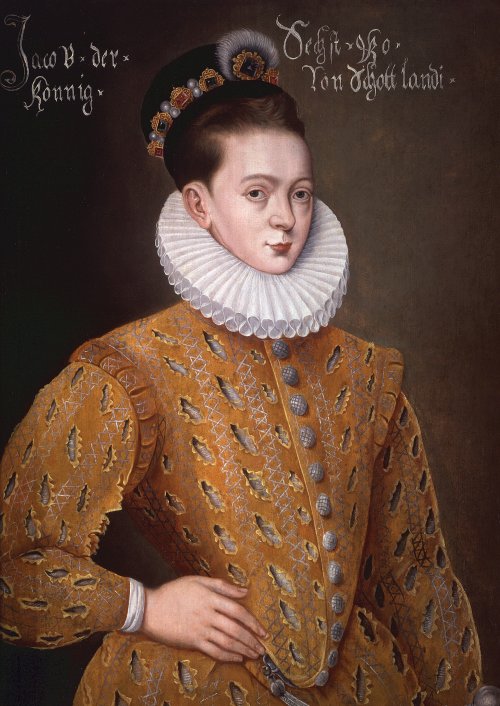 The Weiss Gallery is holding a major exhibition in their St. James’s gallery to mark the 25th anniversary of the founding of the business in 1985. This celebratory exhibition includes a personal selection of some of the most significant works that Mark Weiss has sold to both UK private collectors and public institutions, such as Tate Britain, the National Portrait Gallery, English Heritage, Historic Scotland as well as the Shakespeare Birthplace Trust. To coincide with the show there will be a lavish commemorative catalogue with contributions by Sir Roy Strong as well as other leading art historians and academics.

The institutional loans include two important royal portraits. James VI of Scotland, and later I of England (c.1585) by Adrian Vanson is being lent by Historic Scotland (purchased in 1995). This portrait was almost certainly painted to be sent to Denmark at the time of the negotiations for the proposed marriage to the princess Anne of Denmark. The second royal portrait is Charles II, as a baby (c.1630), which is being lent by the National Portrait Gallery (purchased in 1997) and is thought to have been commissioned for Henrietta Maria’s mother, Marie de Medici.

The Weiss Gallery’s first ever sale, a painting by Gilbert Soest thought to be Sir Thomas Tipping (c.1650), which was bought by Tate Britain in 1986 and considered one of the masterpieces from the early British collection is returning to the gallery for the exhibition.

Further institutional loans include Thomas Howard, 1st Baron Howard de Walden (1561-1626), later 1st Earl of Suffolk, (circa 1597/8) from Kenwood House, English Heritage (purchased in 1988) and A Family saying Grace before the Meal by Anthonius Claeissins, circa 1580, a rare and important example of Flemish late 16th century group portraiture, from the Shakespeare Birthplace Trust, Stratford upon Avon (purchased in 1990).

In addition, the exhibition will also have major paintings sold to private collectors including an extremely important work, which has never previously been on public display in the United Kingdom. This is an incredibly rare and important painting, the only known triptych (c.1510) by Joachim Patinir still in private ownership.

Patinir (c. 1480-1524), established a distinct panoramic style that was to heavily influence subsequent painters, and is considered the father of Flemish landscape painting.

Other loans from private collections include two masterpieces from the British school: William Larkin’s exquisitely costumed Lady Thornhaugh and John Michael Wright’s lavishly dressed Sir Edward Turner (1643-1721) as well as examples by artists such as Robert Peake and Cornelius Johnson. Paintings from the 16th-century French school include works by Corneille de Lyon and François Clouet and from the Flemish school, works by Jan van Scorel, Pieter Pourbus, Frans Pourbus the Younger, and Sir Anthony van Dyck.

The Weiss Gallery is one of the world’s foremost specialists in early English and Old Master portraiture, renowned for dealing in the finest examples, and for which Mark Weiss is acknowledged as a leading authority. The gallery was first established in Albemarle Street in Mayfair before moving in 2003 to 59 Jermyn Street in St.

Central to Mark’s success has been his connoisseurship and unerring eye for quality and originality which, supported by his commitment to research, has led to many remarkable discoveries such as:
Robert Peake’s portrait of Princess Elizabeth Stuart, (later known the Winter Queen), sold to the National Maritime Museum in 1990. Previously mis-identified, Weiss’s researches proved that this was a companion portrait to that of her brother Frederick Henry, Prince of Wales (Metropolitan Museum), and that they are the earliest examples of British royal portraits in a landscape setting.

Frans Pourbus the Younger’s portrait of King Louis XIII of France, sold to the Cleveland Museum of Art in 2003. Weiss discovered that this was commissioned by Louis’ mother Marie de Medici as a marriage portrait, and that it was the prime version of a portrait hitherto more famously known by a later second version that hangs in the Pitti Palace, Florence.

Anthony van Dyck’s Martyrdom of Saint Sebastian. This highly important work was discovered to be a lost painting that formerly hung in the Prior’s Chapter House of the Escorial Palace as part of a hanging scheme supervised by Velazquez for Philip IV of Spain. The painting has recently been purchased by the Spanish Government and reinstated in its original location in the Escorial.

James’s, one of the most beautiful and prestigious gallery spaces in London.

The exhibition will also provide an opportunity to see the gallery’s current collection, including important recent acquisitions including an extraordinary portrait from 1613 of Nicholas Lanier, a painting of Christ carrying the cross by Nicolas Tournier and a small and intimate portrait of Alice More by the studio of Hans Holbein.