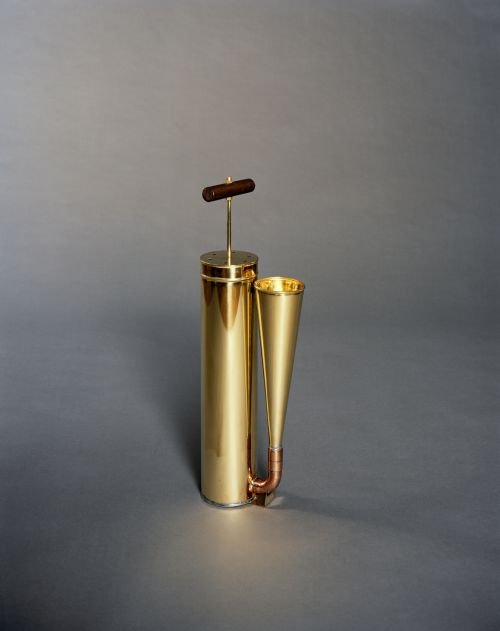 We have a penchant for cladding, disguising, draping, varnishing and covering up – the crooked wall, the aging face, the leaking oil rig, the dented bodywork. We have a penchant for fixing the world around us to hide the way it came about, the way it evolved or the way it works, so that it can just sit before us to be appreciated and admired like a perfect, glistening box. Actions disappear in the outcome, cracks, defects and mistakes are concealed, spaces edited out. We like the outcome, the performance, the action, the event and the glamour – and we get rid of what’s in between, what’s absent, dull , the anticlimax, we wipe away everything we don’t want, tossing it into the real or virtual trashcan.

Stefan Burger is well aware of this display of perfection and presence (especially in photography with its ever so homogeneous surfaces, its brilliant appearance and its mass medial dissemination) and he scratches the surface, walking into the rear courtyard and coming across chaotic construction. He has a way of removing all the camouflage to reveal what lies underneath, things half finished, stuttering processes, the before and the after, the abandoned and the empty. It is not the blossoming flower pot that interests him but the empty planter, not the latest fall fashions but the sales, not the great performance but the abandoned stage after the lights have gone down. He is interested in scenes that show the process of construction, the scaffolding and the supports. He exposes mechanisms: mechanisms of perception, production and operation. His quest leads him to the “circumstances” of the world, the movement backstage and the unfolding scenes. He also looks at the modus operandi of making art, producing pictures, and showing and exhibiting works. Just as the police seal off the scene of a crime in preparation for a step by step reconstruction of what led to the unknown accident or incident, Burger sets up “buoys” to mark possible arenas, strands of action or situations. He investigates conditions; he wonders why things happen, why they keep happening, and why they happen at all. As a rule, his buoys provide no truths and certainly no definitive ones; on the contrary, they raise new, probing questions that lead us deeper and deeper into the underbrush, like orienteering.

Stefan Burger (*1977 in Müllheim (D), lives and works in Zurich) began his career as an artist in the field of photography, which he studied at the Hochschule für Gestaltung und Kunst in Zurich. He sees photography as a kind of base camp from which to branch out and explore other media and he cultivates an unabashed iconoclasm; he plays with the potential of the image, with traps in production, montage and presentation as well as the act of reception in the interplay between viewer, picture, subject matter, vehicle and caption. His visual mind games fill not only the gallery space but the extended realm of art itself, in surprising, unpredictable, witty and sometimes dark ways. Under the Circumstances includes new site-specific works and an overview of past work.

The exhibition is curated by Urs Stahel.