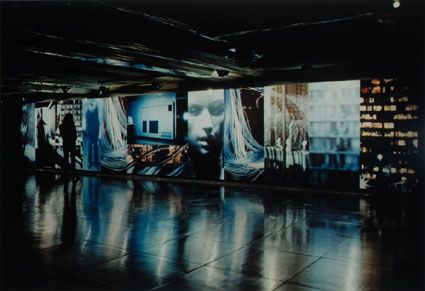 Lewis Baltz (b.1945) is one of the most prominent representatives of the “New Topographics” movement, which changed the direction of American photography in the 1970s and has had a formative impact on every generation since. However, Baltz’s innovations began already in the 1960s. The Art Institute of Chicago has organized the first survey ever of Lewis Baltz’s inaugural body of work, the Prototypes (c. 1967-1973). The exhibition also puts on view for the first time in 12 years Ronde de Nuit, a monumental work of the early 1990s. Lewis Baltz: Prototypes/Ronde de Nuit–on view in the Modern Wing’s Bucksbaum Gallery (G188) from September 25, 2010 through January 9, 2011–features 42 Prototype works, including several that have never before been published or exhibited. This is Baltz’s first solo exhibition in the United States in more than a decade.

Beginning in 1965, but especially from 1967 to 1973, Lewis Baltz made a body of work that concentrated on the dialectic between simple, regular geometric forms found in the postwar industrial landscape and the far from simple culture that generated such forms, or was conditioned by them. Stucco walls, parking lots, the sides of warehouse sheds, or disused billboards baked in the steady Californian sunlight–these and other “hyper-banal” subjects were printed in blacks and whites of a breathtaking tonal evenness. Baltz called his works “Prototypes,” by which he meant replicable social conventions as well as model structures of replicable manufacture. The fraught relation of neutral form to highly charged content plays itself out on the emphatically planar surface of these prints, objects that exude magnificence and severity simultaneously. Never before shown together as a group, the Prototypes are revealed in this exhibition as model creations for their time and ours. They are among the earliest artworks to show the fascinating, disturbing transformation of the American landscape into an unending terrain of anonymous commercial architecture as well among the first photographs to seek the starkly reductive forms of minimal and post-minimal art “out in the world.”

In 1971, upon seeing the Prototypes, gallery owner Leo Castelli immediately agreed to exhibit Baltz’s photographs, and he remained Baltz’s American representative until the artist relocated to Europe nearly 20 years later. Included in the presentation of Lewis Baltz: Prototypes/Ronde de Nuit is a monumental sculpture by Sol LeWitt from the Art Institute’s permanent collection and a nine-foot oilstick drawing by Richard Serra–two artists also featured at Castelli, and whose work the young Baltz greatly admired. Bringing together these three artists for the first time, the exhibition shows the affinities and analogies that developed across media around 1970, when photography first moved to the center of concerns in contemporary art.

Augmenting Lewis Baltz: Prototypes/Ronde de Nuit is a piece made by Baltz in 1992, initially for an exhibition at the Musée National d’Art Moderne, Centre Georges Pompidou, in Paris. Measuring 35 feet across by 7 feet tall, and printed on aluminum-mounted cibachrome panels, Ronde de Nuit is as far in scale and appearance as one could get from the Prototypes. Yet across the manifest differences, this mural-size work maintains underlying continuities in the artist’s preoccupations. Baltz remains substantially concerned over the cancerous spread of our industrially manufactured habitat and how the elements of manufacture can be used to standardize and restrict the inhabitants–ourselves. Ronde de Nuit consists of 12 separate photographs, taken at a police surveillance station in northern France, to form a panoptic tableau of voyeurism and control. Some photographs are enlargements of closed-circuit screen images; others show mainframe computers, cable conduits, and other equipment in the bowels of the police station. The resulting composition merges Rembrandt with Piranesi in the digital age. Its effect on viewers is magnetic, moving, and uncanny.

Publisher Gerhard Steidl has collaborated with the Art Institute to reissue a book on the Prototypes, first printed in 2005. This revised and expanded second edition of The Prototype Works contains 29 photographs, located during research for the exhibition, that were never before published or in some cases not previously identified as belonging to the series. It also features an in-depth scholarly essay by the exhibition curator, Matthew S. Witkovsky, who is Curator and Chair of Photography at the Art Institute of Chicago. A limited edition of this book, with an individual dust jacket, is available only in the Art Institute’s Museum Shop for $55. The same book, without a dust jacket, also inaugurates a 10-volume box set by Steidl titled Lewis Baltz WORKS . This box set is a reissue of all Baltz’s most significant books, including several rarities that have become highly prized collector’s items. Printed in luminous quadratone, WORKS is a testament to the importance of the book as a primary medium in Baltz’s practice. This strictly limited edition of Lewis Baltz WORKS is likewise available at the Art Institute’s Museum Shop for $600.