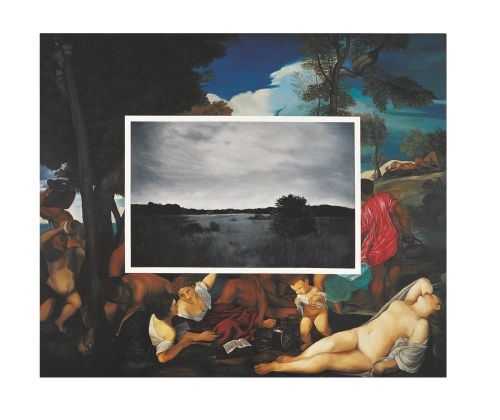 The Singapore Art Museum (SAM) is proud to present the first solo exhibition of a Thai artist, Natee Utarit entitled, Natee Utarit: After Painting. This extensive exhibition, which is sponsored by Credit Suisse AG as part of the Bank’s “Innovation in Art” series, is a mid-career survey of one of the leading figures in contemporary Thai painting. It marks Natee Utarit’s biggest solo show to date and his first museum retrospective. It has been made possible through the museum’s close ties with key local and overseas partners in both the public and private spheres.

More than 70 paintings in the exhibition chart the artist’s vast oeuvre, which has spanned over 20 years. The works are drawn from the collections of SAM, Queensland Art Gallery and Bangkok University, as well as from over 10 private collectors in Europe and Asia, reflecting the wide-ranging interest and regard for Natee’s practice.

While the the death of painting has been extensively debated in the West, painting continues to feature prominently within Southeast Asia as a medium of artistic expression. Despite undergoing the same academic painting training in Thailand, Natee has set himself apart from his counterparts with his unique relationship with painting and the contemporary nature of his work. Throughout his career, Natee worked towards achieving a technical mastery over celebrated forms of Western art, while at the same time critically examining the tradition.

It is in this context that SAM presents Natee Utarit: After Painting, which explores Natee’s work through his diverse artistic strategies that examine the structure and form of the medium of painting. The four exhibition sections Painting As Narrative, Painting About Paintings, Painting After Photography and Beginning After Painting feature works from his practice over the past two decades and reveal Natee’s compelling responses towards the history of the painting tradition, as well as its role as a critical mode of expression in contemporary art today.

Painting as Narrative presents works created in the last four years where Natee increasingly employs the painting tradition to examine critical issues in contemporary Thai society. The pieces reveal stories through everyday objects and include those which fall into the still life category. Painting About Paintings demonstrates Natee’s skill in the medium and showcases his deeper examination of Western art. His paintings make reference to, and critically revisit, numerous historical paintings by renowned masters from the region, illustrating Natee’s intense investigation of the nature of the image. The next section, Painting After Photography, introduces visitors to Natee’s inquiry into the issue of authenticity within the world of images through works that deal with the medium of photography. By reframing photographs in the context of painting, Natee reveals how time and memory play a crucial role in shaping the construction of one’s reality.
Beginning After Painting completes the mid-career survey with his early works that centred on modes of image-making, including figuration and landscapes.

Director of SAM, Mr. Tan Boon Hui, said: “SAM continues to build lasting relationships with the many outstanding living contemporary artists of this region. Southeast Asian contemporary art is special for the skillful way artists like Natee are able to express sophisticated ideas and views on the state of our contemporary life today through the compelling works they create. We have already featured two successful exhibition surveys of well-respected artists: FX Harsono of Indonesia and Vincent Leow of Singapore. For 2010, we are proud to be able to add this show by the remarkable Thai artist Natee Utarit to our series of solo exhibitions profiling leading Southeast Asian contemporary artists who have contributed to the region’s contemporary art scene.”

Mr. Tan Boon Hui added: “This exhibition would not have been possible without the support of Credit Suisse and our many other important institutional and individual partners. The long-term partnerships SAM has developed enable us to promote contemporary art of Southeast Asia, and develop SAM and Singapore as the reference point for contemporary art in the region.”

Natee Utarit: After Painting is sponsored by Credit Suisse AG as part of the Bank’s “Innovation in Art” series, a partnership with the Singapore Art Museum that was formed to present a series of inspiring shows to Singapore audiences over a three-year period.

Commenting on the exhibition, Mr. Tee Fong Seng, Vice Chairman Private Banking Asia Pacific at Credit Suisse AG, said: “As part of our commitment to supporting our local communities, Credit Suisse is extremely privileged to collaborate with the Singapore Art Museum today to bring the best of Asian contemporary painting to Singapore, a key location for Credit Suisse in the Asia Pacific region. This is the ninth impressive show we have staged in our “Innovation in Art” series over the last three years. Through our wide range of innovative arts and cultural sponsorship initiatives we aim to play a beneficial role in encouraging the growth of a rich and stimulating cultural scene in the locations globally in which we serve our clients.”

Merchandise inspired by Natee’s work has been produced exclusively for SAM. These include items such as T-shirts silkscreened with images of two of Natee’s paintings – Tales of Yesterday, Today, Tomorrow and Green Soldier. In addition, as an extension of his Met Bag series, Natee has also produced a limited edition of 30 ornamental SAM paper bags as part of the merchandise line.

Natee Utarit: After Painting will run from 1 October 2010 to 20 February 2011 at the Singapore Art Museum. Other events including a curator’s tour, an opportunity to meet the artist himself and screenings of Thai films have been organised as an extension of the exhibition.