Teresita Fernández at Modern Art Museum of Fort Worth 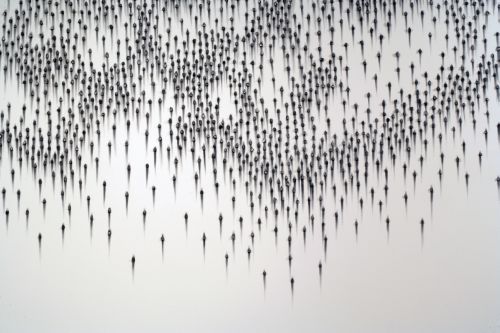 Sculptor Teresita Fernández creates work in response to nature. Reminiscent of clouds, rainstorms, waterfalls, and stars in the night sky, Fernández’s mercurial forms shimmer, float, and undulate before our eyes. The artist is interested in generating an intimate experience with each of her installations. As she has put it, “What I’m after is a lingering, ephemeral engagement. Slow, quiet, and with enough depth kinesthetically to be recalled by the viewer after the work is no longer in front of them.”

Fernández was born in 1968 in Miami, Florida, and lives and works in Brooklyn, New York. She received her BFA at the Florida International University, Miami, in 1990; and her MFA at Virginia Commonwealth, Richmond, in 1992. She has been featured in numerous solo exhibitions, both nationally and internationally, including the Blanton Museum of Art, Austin, Texas; Miami Art Museum, Miami, Florida; Artpace, San Antonio, Texas; and the Corcoran Gallery of Art, Washington, DC. Fernández was one of seventeen artists worldwide whose work was chosen to be featured in the new Cowboys Stadium. Her luminous Starfield, 2009, made with mirrored glass cubes on anodized aluminum, is located in the West OC Elevator lobby of the Owner’s Club.

Kings, Queens, and Courtiers at Art Institute of Chicago Regine Schulz: executive director of the Roemer and Pelizaeus Museum (RPM) in Hildesheim, Germany