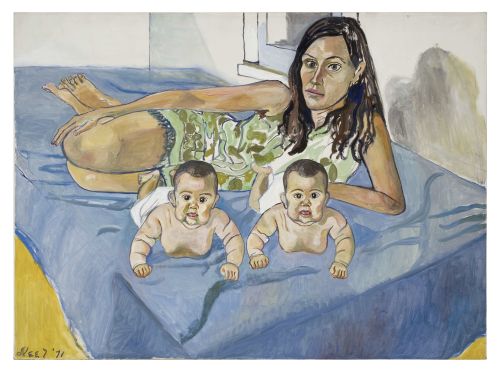 Today, Alice Neel (1900-1984) is an iconic figure in American painting. For most of her life, however, she worked without recognition from either critics or the public. Persistently and unremittingly, Neel continued to paint portraits – or pictures of people, as she preferred to call them – in an era that was dominated by abstract expressionism, pop art and the readily available photograph.

Alice Neel’s oeuvre is characterised by a genuine fascination with people and a striving to make sense of the human drama of everyday life. Neighbours, friends, artist colleagues and family members were portrayed in her psychologically incisive portraits. Neel painted all kinds of people, of all ages, and without masking their vanity, vulnerability or eccentricities, she captured their inner and outer features and qualities. Her works give an idea of the social and economic diversity of American life in the mid-20th century.

In 2008, Moderna Museet Stockholm featured a smaller exhibition of Neel’s work, but this is the first time Neel’s oeuvre is shown more extensively in Scandinavia. Alice Neel: Painted Truths highlights nine different themes, such as Nudes, Old Age and The Psychological Portrait. In addition to her famous portraits, the exhibition includes her less well-known street paintings. Altogether, 59 works are presented, spanning more than 70 years of Neel’s career – from the 1920s to the 1980s.

Two films will also be shown as part of the exhibition, by the French artist Michel Auder, and by Alice Neel’s son, Hartley Neel. Both films show Alice Neel in action, painting.

A richly illustrated and comprehensive catalogue has been produced for the exhibition, with essays by Jeremy Lewison, Barry Walker, Robert Storr, Frank Auerbach and Marlene Dumas.