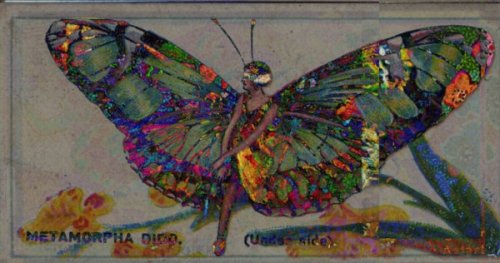 [ad#lb]
Weaving together the interconnected histories of dance, cinema and the sciences, the works of Christine Davis conjure up encounters that are surprising, to say the least, between the poet Stéphane Mallarmé, the dancers Loïe Fuller and Vaslav Nijinsky, and the mathematician Euclid. From May 22 to September 7, 2009, the Musée d’art contemporain presents Christine Davis.

Born in Vancouver en 1962, Christine Davis lives and works in Toronto. Over the last twenty years, she has developed a highly poetic, sensual body of work exploring literature and the human psyche. The artist projects—literally and symbolically—images onto unusual screens that are both “feminine” and fantastical: feathers, buttons, butterflies, flowers…

This exhibition presents a series of new works by Davis. The three multimedia installations and eight collages take as their point of departure two key figures in the beginnings of modernity, the poet Stéphane Mallarmé (1842-1898) and the dancer and choreographer Loïe Fuller (1862-1928). Mallarmé viewed dance as the ideal form of poetry-as-theatre. Two of his four texts on dance were devoted to Fuller, a fascinating figure in the early days of modern dance. Her experiments with electricity, lighting, mirrors and chemical compounds led Mallarmé to describe her work as both “intoxicating art” and an “industrial accomplishment.”

In the installation Did I Love a Dream?, 2008-2009, Davis “illuminates” an excerpt from a film of one of Fuller’s trademark serpentine dances. Using a clever cinematographic technique—projection in reverse—she defies the laws of gravity. The copper screen hung from the ceiling alludes to Fuller’s experiments with electricity and lighting, while the imposing presence of the film projector combines with the ethereal projection to form a sculptural object. The title is drawn from Mallarmé’s poem L’Après-midi d’un faune.

In the eight collages of Euclid/Mallarmé, 2008-2009, Davis embeds lines from L’Après-midi d’un faune into selected pages of an 1847 edition of Euclid’s Elements. In this way, she replaces the Greek mathematician’s text on three-dimensional space with a poem written at a time when Euclidian geometry was no longer in vogue.

Euclid/Orchid, 2008-2009, presents a material and philosophical dialectic. A page (2D) from Euclid’s Elements is projected onto a live orchid (3D), setting up an opposition between images of time-free space and the very slow movement of plant growth, between intellect and emotion, between culture and nature.

The short video loop Satellite Ballet (for Loïe Fuller), 2008-2009, highlights the technological shifts that occurred at the dawn of both the twentieth and the twenty-first centuries, taking us from the age of mechanical reproduction to the digital era. The clip is presented on a dozen iPod Touches arranged on the walls according to Nijinsky’s choreographic notations for L’Après-midi d’un faune.

Also on view is an earlier work by Davis, Not I/Pas moi, 2006-2007, recently acquired by the Musée and presented until October 4, 2009 in The Collection: Some Installations, an exhibition organized by Josée Bélisle, curator in charge of the Musée Collection. This piece takes the form of a hanging screen covered with vintage buttons and flanked by two mirrors. Excerpts from texts by Samuel Beckett and Simone Weil are screened alternately in French and English, forwards and backwards, thus becoming readable, in turn, on the screen and on the mirrors.

These two complementary presentations will offer visitors a deeper appreciation of this sensitive, intriguing work. The exhibition Christine Davis was curated by Lesley Johnstone, curator at the Musée. The works were developed at the Future Cinema Lab of York University in Toronto, where Davis inaugurated the Artist Residency Program.

Catalogue
The exhibition will be accompanied by a bilingual, 96-page catalogue, the result of a happy collaboration between the Musée and the Future Cinema Lab. It will contain essays by Lesley Johnstone, Musée and exhibition curator, Olivier Asselin, philosopher and filmmaker, and Josée Bélisle, curator in charge of the Musée Collection, along with a list of works, a biobibliography and colour reproductions of the works in situ. The publication will be available for $24.95 at the museum’s Olivieri Bookstore or from your local bookseller.

Meet the artist
Meet Christine Davis (in French) as well as artists Robert Polidori (in French) and Spring Hurlbut (in English) on Thursday, May 21, from 5 to 6 p.m. in the exhibition galleries.

Reading room
A reading room devoted to the artists featured this summer at the MAC has been set up in the Mariette-Clermont Lounge adjoining the exhibition galleries.

Out of the Commonplace: The Folk Art of Delaware Spring Hurlbut