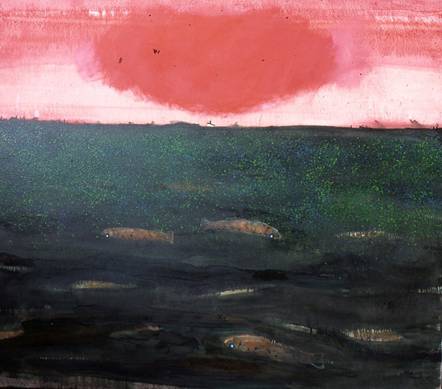 A wide-ranging survey of the work of the distinguished artist Barrie Cooke, organised to mark his 80th birthday, opens to the public at the Irish Museum of Modern Art (IMMA) on Wednesday 15 June 2011. Entitled simply Barrie Cooke, the exhibition comprises some 70 paintings and sculptures, from the Sheila-Na-Gig images and the Perspex bone boxes of the 1960s and 1970s to the nudes which have formed a constant mode of expression in his practice. Works are drawn from the Museum’s own significant holding of Cooke’s oeuvre, as well as from public and private collections.

A major figure in the development of painting in Ireland, Barrie Cooke was born in England, but since 1954 has been resident in Ireland, which he found offered him an ideal environment for his lifelong love of nature, and his twin passions of painting and fishing. This fascination with nature can be seen from his earliest works, a series of studies of water from the 1960s focussing on lakes, streams and rivers, where drips and splashes of paint capture the surface of the water. As with other subjects, his concern is with water as a physical phenomenon – the source of life for all living things – rather than as a reflection of a mood or feeling. Two of his 1960s Sheila-Na-Gig sculptures, inspired by medieval fertility stone carvings found in parts of Ireland and Britain, are also included in the exhibition.

Animal studies were another subject at this time, from drawings of small bones, which the butcher saved for Cooke’s dog, to whole carcasses. However, their lack of physical realism lead the artist to turn to the creation of the bone boxes of the 1970s. These comprise Perspex boxes containing artificial bone sculptures, rendered in clay fired at 950° C and painted in layers of acrylic. A variety of real bones in the shape of pike jaws and a ram’s spine were inserted into individual boxes.

Painting and box come together in Slow Dance Forest Floor (1976), a work from IMMA’s Collection, comprising a box containing organic material projecting from a semi-abstract painting depicting a rainforest. This was created during a visit to Malaysia, where the artist lived among the Iban and Kelabit tribes, sharing the latter’s communal longhouses. Cooke has travelled extensively, exploring the formation and transformation of the environment in remote and exotic landscapes through painting and fishing. His entire body of work is marked by journeys mapping all that he has seen and experienced in Lapland, Cuba, Cape Cod, Mexico, New Zealand, Russia, and most recently, Madeira. The formation, transformation and degradation of the environment have been constant motifs – works relating to Ireland and, more recently, to New Zealand, which Cooke had found to be a clean and unspoilt terrain during earlier visits in the 1980s and 1990s.

Born in Cheshire, England in 1931, and brought up in Jamaica and Bermuda, Cooke moved to the US as a teenager and studied art history and biology at Harvard University. Having moved to Ireland in 1954, he had his first solo exhibition in Dublin the following year and the following year received a scholarship to study with Oskar Kokoschka in Salzburg. He represented Ireland at the Paris Biennale in 1963. He has exhibited widely throughout Europe, the US and Canada. Major retrospectives include shows in the Douglas Hyde Gallery (1986), the Haags Gemeentemuseum, The Hague (1992), and LAC, Perpignan, France (1995). His work is held by IMMA, the Ulster Museum, the Stedelijk Museum, Amsterdam, the Haags Gemeentemuseum, and in many other collections worldwide. He won the Marten Toonder Award in 1988 and the Irish-American Cultural Institute’s O’Malley Award in 2002.

The exhibition is organised by IMMA and is curated by Karen Sweeney. It will travel to the Crawford Art Gallery, Cork, in November