Kings, Queens, and Courtiers at Art Institute of Chicago 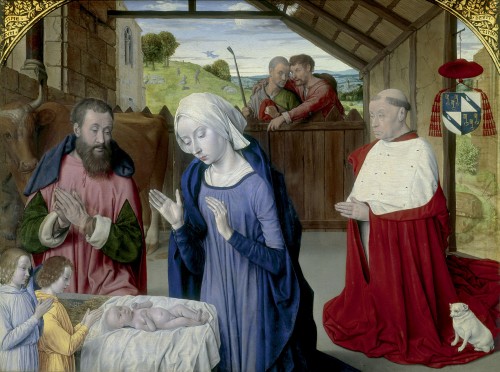 The extraordinary quality and dynamism of the visual arts in France at the dawn of the Renaissance receives the royal treatment this winter at the Art Institute of Chicago. Kings, Queens, and Courtiers: Art in Early Renaissance France–on view February 27 through May 30, 2011 , in the museum’s Regenstein Hall –is the first exhibition in the United States to be devoted to this fascinating period in French art, when late Gothic exuberance encountered the energy and harmony of the Italian Renaissance. Consisting of outstanding loans from French museums and public collections, as well as many prestigious cultural institutions in the United States, Germany, Belgium, the Netherlands, and the United Kingdom, the exhibition features nearly 120 exquisite objects, including tapestries, altarpieces, sculptures, reliquaries, and illuminated manuscripts. Co-organized by the Art Institute and the Réunion des musées nationaux in Paris, Kings, Queens, and Courtiers makes its only North American stop at the Art Institute, providing the rarest of opportunities to delve into a fascinating and dynamic period in French history and visual art.

In the Middle Ages, the king of France enjoyed special prestige among the European rulers, and his kingdom boasted a glorious artistic tradition. But beginning around 1500, France entered an age of truly rapid expansion and creative energy. Enjoying the benefits of peace and prosperity at home, demographic growth, and nearly unprecedented cultural development, France could afford to explore territorial ambitions in the hotbed of Italian politics. Two young kings, Charles VIII (1483-1498) and Louis XII (1498-1515), in turn took the throne–as well as the same wife, Anne, the lively heiress to the duchy of Brittany–and pursued dynastic claims and dreams of glory, given material form in the luxurious objects presented in this exhibition. Their military campaigns in Italy and occupation of such cultural hubs as Milan, Genoa, and Naples brought forth a new art that blended Renaissance styles with the brilliant Gothic art of northern Europe in an exuberant and elegant fusion. France served as a crossroads, where the latest currents in European art from north and south were combined. Unique and vivacious, these resultant artistic styles and movements have, until now, been overlooked to the extent that most books on European art in the period scarcely mention France in this tumultuous period, favoring instead the glamorous age of Francis I or the work of the earlier decades of the 15th century.

The nearly 120 works of art in Kings, Queens, and Courtiers embody this vital intersection in history. Outstanding examples of revolutionary works from many different media are featured, including manuscript illuminations by Jean Fouquet, Jean Bourdichon, Jean Poyer, and Jean Colombe, who worked for the king and queen; portraits and devotional paintings by Jean Hey, known as the Master of Moulins and the finest “French” painter of the period, who worked for the powerful dukes of Bourbon; the serene Virgin and Child from Olivet at the Louvre, associated with Michel Colombe, the most brilliant documented designer of sculptures used by kings and queens to assert power and prestige; and even an exceedingly rare loan of a work by Leonardo da Vinci and assistants, The Madonna of the Yarnwinder (1501/1507). Astounding examples of stained glass from France, tapestries, rare pieces of goldsmithwork, and exquisite manuscripts for private devotion help complete the picture of this period of luxury, power, emulation, adaptation, and reformulation.

The exhibition thus shows modern viewers how the French kings used artistic production in all media to give creative expression to what was viewed as a sacred role in a rapidly expanding world. But the exhibition is not limited to royal life; it also illuminates the artistic life of the period. In an era when the court was located largely in the Loire Valley, Kings, Queens, and Courtiers also details the organization of workshops and the development of the influential art market in Paris, the political capital of the country, and in smaller courts, border regions, and along trade routes. Thus the exhibition focuses on several vital artistic centers, including Moulins, the capital of the dukes of Bourbon; Lyon, a center of the new printing trade; and Limoges, where innovations in ancient craft techniques produced a new, more affordable type of pictorial enamel. These innovations changed the shape of art and its audience. Through an extraordinary range of rare and precious objects, this exhibition brings to our modern age the visual splendor of a dynamic period in Europe’s history.

The sumptuous catalogue accompanying Kings, Queens, and Courtiers: Art in Early Renaissance France is the first full treatment of this subject in English. In addition to the 180 color illustrations and detailed entries on each object featured in the exhibition, the catalogue includes essays by Philippe Contamine, professor at the Sorbonne (retired); Pierre-Yves Le Pogam, curator in the sculpture department of the Louvre; Philippe Lorentz, professor at the University of Strasbourg; and Martha Wolff of the Art Institute, co-curator of the exhibition, on the historical situation of France, the range of Renaissance styles, and the patronage and genesis of these works of art. The catalogue, published by the Art Institute of Chicago and distributed by Yale University Press, is available for $60 at the Art Institute’s Museum Shop.