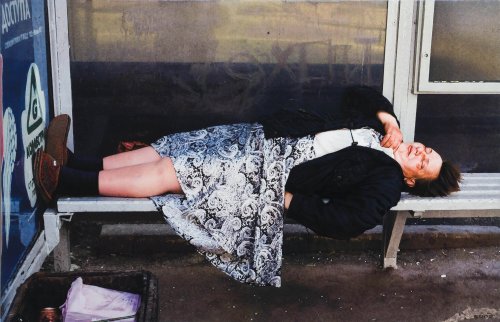 Moscow Museum of Modern Art and Regina Gallery opens a large-scale exhibition by Semen Faibisovich, showing two latest periods of the artist’s creative career: the “Evidence” project of the first half of the 90s, and a newly created after a 12-year break “Razgulyay” cycle.

The “Evidence” project of the first half of the 90s, is devoted to the study of how we see the world. Back then I was interested in the optics of human eyesight: blind spots in the eye, moving across the “normal” image of the world, residual vision effects, when the negatives of reality emerge on the eyelid screens and start living a life of their own, image duplication, which arises when the eyes cease to act as a binocular… That is to say, the study of optical and physiological “intermediary layers”, through which we see the world – as a rule, without even noticing them. Or we do not take notice of the other world, which they entice us to enter: the so-called “abstract realism” or “realistic abstraction”, where the age-old opposition of figurativeness and non-figurativeness, realism and abstraction, no longer makes sense, where there is an alternative interrelation of colors, and the space is mapped out differently. Previously, challenging the hypnotizing boa of Soviet reality to a staring contest in order to portray it, I was concerned with the question “what we see?”, but then the boa died, and there was nothing left to stare at – however, the habit of looking closely stayed, and it inspired to switch the visual focus from the result to the process, from the public to the intimate.
The “Razgulyay” cycle, newly created after I turned back to painting after a 12-year break, raises the two questions – “what we see?’ and “how we see?” – simultaneously. The surrounding reality regained its hypnotism, and I once again found myself mesmerized. “The intermediary layers” between it and our eyes, now of a different psychological, socio-cultural quality, multiplied. They were produced by the latest technologic advances, including “total mobilization” (derived from ‘mobile”) of vision, and by the post-modern paradigm, which abolished the coordinates system, – its craziness replacing the Soviet paranoia, – and by “glamour”, which saturated all informational and cultural space, taking over from Social realism in substituting the glamorized world for the real one, which then in its turn became unprepossessing, unfair, uninteresting. So I tried in creating a truthful portrait of the new epoch to come over the enforced stereotypes and to adapt the new “spirit of the times”: to cast in epic forms the marginal life of the homeless, to combine the ultimately democratic – mobile shots – with quality painting, Photoshop gags with painting techniques…. In other words, the utterly incompatible is combined in many ways in an attempt to create “the new synthesis” of the contemporary cultural garbage.
The continuity of the projects, differing radically in ideologies, philosophies, artistic techniques, is established by the artist’s coherent focus on the viewer’s personal experience: they are invited to see what they themselves see everyday – only in their customized versions and with their own eyes.