In August 2010, on the occasion of Peggy Guggenheim’s birthday and the 30th Anniversary of the museum, the Collection launched the project “A Gift for Peggy”, a fund-raising campaign to made possible the purchase of two pairs of earrings that once belonged to Peggy and which were created for her by Yves Tanguy and by Alexander Calder. Peggy wore one each of these on October 20 1942 at the inauguration of her historic New York museum-gallery Art of This Century to declare her impartiality between Surrealist and abstract art.
“I wore one of my Tanguy earrings and one made by Calder in order to show my impartiality between Surrealist and abstract art.” Peggy Guggenheim 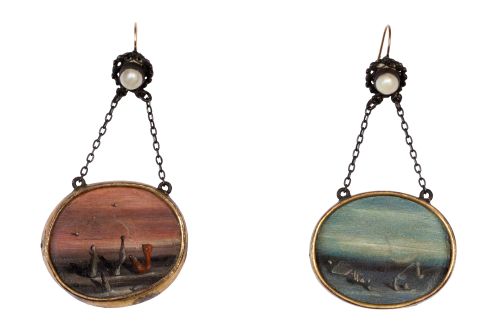 Today, the museum is pleased to announce that the first pair of earrings, painted by Yves Tanguy, have at last returned “home” thanks to the generosity of the members and friends of the museum who, with their enthusiasm, have added a new and intriguing episode to Peggy’s story which is told by works of art.

The earrings will be on display in Palazzo Venier dei Leoni until late September, when they will travel to Basel for the exhibition Surrealism in Paris at the Beyeler Foundation, opening October 2, in which an entire gallery will be dedicated to Peggy Guggenheim.

Free Ai Weiwei on the roof of Kunsthaus Bregenz Sculptures by Antonio Díaz García in the Salone Donatello at the Basilica of San Lorenzo, Florence