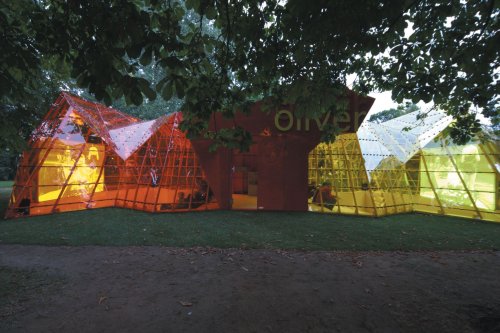 The Cuban-American artist Jorge Pardo, widely regarded as one of the most influential artists of his generation, returns to the Irish Museum of Modern Art (IMMA) with his first major solo exhibition in Ireland on Wednesday 17 February 2010. Jorge Pardo is a challenging retrospective that uses the architecture of the Museum to embrace the world of swiftly changing technology and question how art can be innovative and relevant in the 21st century. The exhibition, which follows the artist’s notable participation in the group exhibition .all hawaii eNtrées / luNar reGGae at IMMA in 2006, comprises a single work in the form of photomural wallpaper covering the walls of the entire East Wing Galleries.

Jorge Pardo depicts, in chronological order, all of the artist’s work since the late 1980s, ranging from sculpture and installations to design and architecture. It includes such major projects as Oliver, Oliver, Oliver, an outdoor cinema pavilion created in Braunschweig, Germany, in 2004, and Untitled (Pleasure Boat), a luxury cruise boat built as a functional sculpture in 2005. Every aspect of the exhibition, including labels and wall texts, is incorporated into the wallpaper. On entering the gallery space the viewer is taken on a journey not only through Pardo’s career but also through a social history of his adopted city of Los Angeles, with headlines from the LA Times and photographs of exhibition openings and the architecture of Los Angeles.

Pardo operates at once inside and outside of the art world. He views art largely through the perspective of design and architecture, and making no hierarchical distinctions between his paintings, sculptures, installations, buildings or lamps. Equally important is the framework within which his works are seen, be that a museum or a café. In this, Pardo’s practice taps into a long history of the intersection of art, design and architecture, seen as early as the 1920s and ‘30s in the work of the Hungarian artist László Maholy-Nagy, in whose spacial design project, The Room of Our Time, 1930, all works are presented as reproductions. Pardo extends this line of enquiry, challenging the notion of public and private space and how we use it. Other influences include artist Robert Smithson, exhibition designer Lilly Reich, architects Bruce Goff and Tadao Ando, and the 20th-century Finnish designer Alvar Aalto.

A prominent feature in Pardo’s work is his use of domestic materials in a non-domestic space, thus prompting a re-evaluation of space by the viewer. In 2000, Pardo installed Project in the Dia Art Foundation lobby, bookshop and gallery, New York. By cladding the floor and walls in coloured tiles, he transformed the white-cube space, forcing the viewer to consider whether it was still a gallery space. Social interaction is another key concern, and Pardo uses his furniture and beautifully coloured lamps as a means of transforming everyday spaces into aesthetic environments. Bars, restaurants and even public squares are transmuted into hybrids of high-end interior design, gallery spaces and functional social areas. For example, in 2003 Pardo redesigned the interior of The Mountain Bar, a trendy Los Angeles Chinatown haven that attracts both art aficionados and locals.

Perhaps the best examples of Pardo’s cross-over into architecture are when he makes or remakes buildings. One of his major current projects is his reimagining of a ruined house in the jungle outside Merida, in Mexico’s Yucatán Peninsula. He approaches this act more as a sculptor would an object then an architect would a building. His own house offers a further example. This was built for an 1998 exhibition at the Museum of Contemporary Art, Los Angeles, where it was shown as 4166 Seaview Lane.

Jorge Pardo was born in Cuba in 1963 and moved with his family to Chicago when he was six years old. In 1984 he move to California and currently lives and works in Los Angeles. Recent exhibitions include mid-career surveys at K21, Dusseldorf, 2009; Jorge Pardo: House, Museum of Contemporary Art, North Miami, 2007-08; theanyspacewhatever, Guggenheim, New York, 2008, and Fundació La Caixa, Barcelona, 2004. Architectural projects and non-specific spaces have included renovating a house in Merida, Mexico, 2009; re-designing display cases for the Smithsonian American Art Museum, Washington DC, 2007; creating a restaurant, Untitled (Café-Restaurant), 2002, for the K21 Museum in Düsseldorf; and 4166 Sea View Lane, 1998, a house built as an artwork for the Museum of Contemporary Art, Los Angeles, in which he now resides.

The exhibition is curated by Rachael Thomas, Senior Curator: Head of Exhibitions, IMMA.

The exhibition is accompanied by a seminal catalogue that challenges the very format a catalogue should take. Using the formal structural conventions of a catalogue, this book is a 21st-century interpretation. The commissioned essays become a live embodiment of the author, resulting in a five-way conference between the writers that can be found on the internet. The writers include Jorge Pardo; Rachael Thomas; Alex Coles, art critic; Shumon Basar, architect, writer and curator, and Shamin M. Momin, Founder/Director of the recently formed Los Angeles Nomadic Division (LAND). The resulting audio has been transcribed and used as the text for the catalogue, which will be available for download from the IMMA website and on YouTube. It will also be published as an eBook. The catalogue is presented in the exhibition as a series of nine tables on which texts and everything one has come to expect in a catalogue can be read.