Immobilité
A mobile phone art film by Mark Amerika remixed for cyberspace and public space
April 8 to May 9, 2009 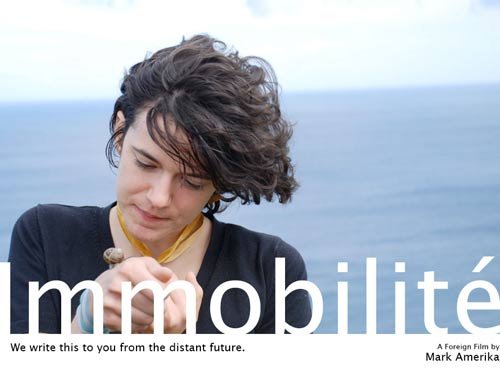 Immobilité, a solo exhibition of new work from artist Mark Amerika, opens Wednesday, April 8th, in the Streaming Museum a new hybrid museum that presents exhibitions in cyberspace and a network of public spaces on seven continents. The work will also be presented in full length in The Project Room for New Media at Chelsea Art Museum and will remain on view through May 9. Amerika will give a talk on Thursday, May 7 at 6:30 PM at Chelsea Art Museum, 556 West 22nd Street, New York.

Amerika describes Immobilité as “a feature-length foreign film shot entirely on a mobile phone in Cornwall, UK.” The work includes an original soundtrack by renowned sound artist Chad Mossholder and introduces Camille Lacadee and Magda Tyzlik-Carver as on-screen personas that drift in and out of the film’s otherworldly landscapes and ghostly narrative sequences.

The story of Immobilité is driven primarily by the innovative use of subtitles as an alternative literary track that situates the work in the rich history of experimental art-house cinema. Bringing to mind the deep philosophical cinema of European auteurs Ingmar Bergman and Michelangelo Antonioni, Amerika mashes up the language of “foreign films” with landscape painting and literary metafiction to reveal a future world where the dream of living in utopia can only be sustained by a nomadic tribe of artists and intellectuals. Tapping into the contemporary angst that fills our own contemporary lives, Immobilité investigates the innate desire of living organisms to release their creative energies as part of a collective strategy of cultural renewal.
The work was composed using an unscripted, improvisational method of acting and the mobile phone images are intentionally shot in an amateurish or DIY [do-it-yourself] style similar to the evolving forms of video distributed in social media environments such as YouTube. By interfacing this low-tech version of video making with more sophisticated forms of film art, Amerika both asks and answers the question “What is the future of cinema?” The work also throws a kink into the conventional museum experience by challenging museum visitors to immerse themselves in this 75-minute work of moving visual art in its entirety.

The website component of the artwork, scheduled to launch in conjunction with the museum opening at immobilite.com, is itself an experiment in expanding the work beyond the museum installation space and includes both video and audio remixes, a freely downloadable “Director’s Notebook,” and an iPhone application that when downloaded can be played as a condensed version of the work composed of remixed film stills and subtitles.

Mark Amerika was born in Miami in 1960 and, after living in New York in the mid-Eighties, has since divided his time between Boulder, Colorado, and Kailua, Hawaii. One of the leading pioneers of early Internet art, his art and writing has influenced a new generation of artists using digital processes to create emerging forms of art that intersect at the boundary of visual art, live performance, and experimental literature.

His artwork has been exhibited in many venues including the Whitney Biennial of American Art, the Walker Art Center, the Denver Art Museum, and the American Museum of the Moving Image. He has had four early career retrospectives including the first two Internet art retrospectives ever produced, one at the ACA Media Arts Plaza in Tokyo, Japan, and the other at the Institute of Contemporary Arts in London. He is the author of many books including his recently published collection of artist writings entitled META/DATA: A Digital Poetics (The MIT Press, 2007). Amerika is a Professor of Art and Art History at the University of Colorado at Boulder. His Internet art can found at his website, markamerika.com.

Financial support for the creation of Immobilité was provided by the Tate Media, the University College Falmouth, and the University of Colorado Innovative Grant and LEAP awards. Amerika’s artist talk at the museum on May 7th is made possible by the Experimental Television Center’s Presentation Funds program, supported by the New York State Council on the Arts.

Streaming Museum is a new hybrid museum that presents multi-media exhibitions in cyberspace and public space on 7 continents, generated in collaboration with international artists, curators and cultural institutions. Launched on January 29, 2008, the museum is produced and broadcast in NYC. Streaming Museum is sponsored by FJC – A Foundation of Philanthropic Funds, and ONSSI On-Net Surveillance Systems, Inc.

The Project Room for New Media and Performing Arts, an international collaborative program initiated in 2003 by Nina Colosi at Chelsea Art Museum, Home of the Miotte Foundation, is an incubator of new ideas, showcasing groundbreaking concepts in all art mediums, and the intersection of the arts through technology. Streaming Museum was developed by Colosi as a project of this program.