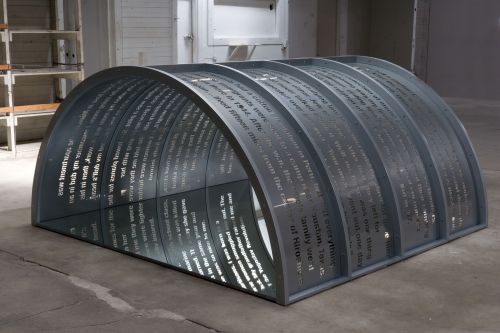 Four Works in Dialogue comprises Post-Partum Document (1973-79) and related work Primapara, The Ballad of Kastriot Rexhepi (2001), Multi-Story House (2007) and the recent piece Habitus (2010). Part V of Mary Kelly’s groundbreaking work Post-Partum Document was acquired for the Moderna Museet collection in the course of the project “The Second Museum of Our Wishes”, and in this exhibition, the complete work is being presented in Sweden for the first time.

Mary Kelly’s works are imbued with a profound interest in material process as well as language and history. Her works are a unique blend of subtly humorous personal narrative and critical analysis, often in dialogue with the women’s movement of the 1970s. Over the years, Mary Kelly’s practice has come to be a vital inspiration and reference point for many younger artists.

By showing Mary Kelly’s major projects from the 1970s together with works from the past decade, the exhibition seeks to engage us in a visual dialogue across generations that have been shaped by different cultural circumstances, but subject to the same historical events. The works in the exhibition capture the diverse voices that form our archive of collective memories, reflecting on the way past hopes and disappointments reappear in the present, and alluding to the formative role of the mother-child relationship in that process.

Mary Kelly’s groundbreaking Post-Partum Document was created over a period of six years. Documenting her son’s gradual mastery of language in the first few years of life, Kelly shows that it is a mutual process of socialisation, affecting both mother and child.

Multi-Story House is part of a larger installation, Love Songs, which visualizes Kelly’s dialogue with younger women about the legacy of feminism. The walls and ceiling are constructed of plexi panels that display short anecdotal narratives about feminism. Some are the voices of Kelly’s contemporaries, others, her students, but all share a common interest in the history of the women’s movement and how it has been challenged and renegotiated. Multi-Story House was created in collaboration with Ray Barrie for documenta 12 in Kassel.

In The Ballad of Kastriot Rexhepi the artist looks at the way language impacts the assumption of national or ethnic identity. Mary Kelly’s prose is based on a newspaper report in Los Angeles Times about the fate of an infant boy during the Balkan war in the 1990s, and describes how a fortuitous event was used by the media as a symbol of Kosovo’s fight for independence.

Habitus was created by Mary Kelly, in collaboration with Ray Barrie, for this exhibition at Moderna Museet. The structure’s shape and size are based on the Anderson Shelter, which was mass produced for home use in Britain during the Second World War. In Habitus the corrugated iron is replaced with panels of laser-cut text that become legible when they are reflected in the mirrored floor. Mary Kelly’s short, quirky narratives recount the memories of a generation born during or after the war began, marked by violent events such as the Holocaust, the war in Vietnam, or the ethnic conflict in Serbia.

In addition to the four major projects, Moderna Museet will also be showing the film Nightcleaners (1970–75) by The Berwick Street Film Collective. Nightcleaners is a 90-minute, black and white film, which documents the lives of women who clean London offices at night and take care of children and household chores during the day. Originally intended to be used in a campaign to organise women cleaners in the Transport and General Workers Union, it developed into an influential experimental film that challenged the documentary genre.