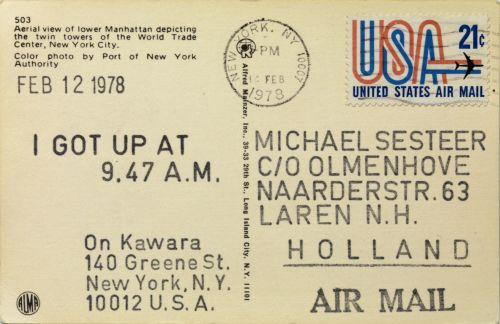 This summer Museum Boijmans Van Beuningen is presenting a varied selection of 68 postcards, five paintings and a telegram by the Japanese conceptual artist On Kawara in the Print Room.

The work of On Kawara (b. Kariya, Japan, 1933) concentrates on the passing and marking of time. By means of a specific registration system, Kawara focuses on the impalpability of time elapsing. One example of this is I am still alive, a series of telegrams that the artist occasionally sends to different people. At the same time Kawara’s oeuvre forms a methodical record of his own life that, when set off against the two million years in an audio recording of One million years (past) and (present) which can be heard at the exhibition, is but highly temporary in nature.
Besides the postcard series, Museum Boijmans Van Beuningen is presenting a number of works from the well-known Today series, sometimes also known as the ‘date paintings’, and a telegram.

The 68 picture postcards in the exhibition are part of Kawara’s I got up series, that he began in 1968, which involves him sending postcards to two different friends or colleagues, the world over, every morning. In doing this the artist follows a set procedure: he stamps the date, his own address and the recipient’s address on the card, followed by ‘I got up at’, plus the precise time that he rose that day. The postcards, with an image of a tourist spot in the city where he is currently staying on the front, document a recurring, daily act by the artist in a uniform manner.
The Dutch artist Michaël Snel Sesteer (1935-1989) received such postcards from Kawara on a daily basis from 26 January to 3 April 1978. Forming the core of the presentation, these 68 cards were added to Museum Boijmans Van Beuningen’s collection in 1989, a ‘promised gift’ from Jeroen Snel, the artist’s nephew.

Alongside the I got up series, the presentation includes five paintings from the Today series, a selection that Kawara made in 1991 at Museum Boijmans Van Beuningen’s request. This selection is as diverse as possible: the legends mention as many different days, months, years, decades, languages, cities, countries and continents as possible. Kawara started working on this series on 4 January 1966, and it now extends to more than 20,000 works. On a monochrome background, usually dark grey but sometimes blue or vermillion, he paints the date of the day on which he is executing the work in white letters. The artist packs each painting in the series into a self-made cardboard box. He then pastes a newspaper article from the day the painting was produced onto the inside of the box. The works from the Today series refer not only to a specific day, but also to the place where the artist was staying at the time. The newspaper cutting is taken from a local newspaper and the date on the painting is recorded in the language of the country where the work was made.