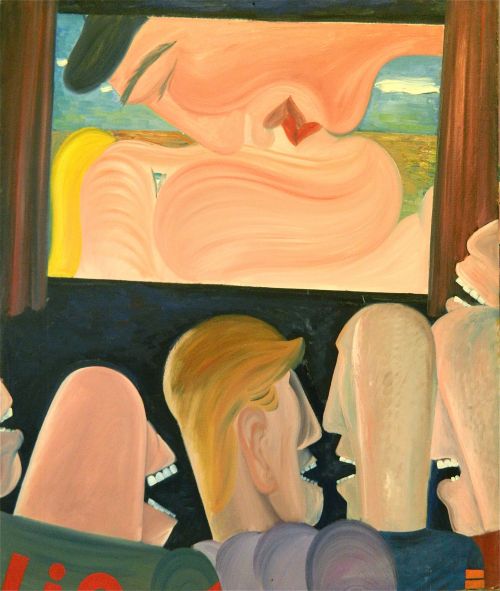 A major survey exhibition of four decades of work by Jock McFadyen, the Scottishborn, East London-based painter, who in recent years has concentrated on powerful urban landscapes, is to be be held at The Fleming Collection at 13 Berkeley Street, London W1 from 17 July to 17 October 2012. The show’s title Made in Hackney reflects the fact that many of the pictures were painted in McFadyen’s studio in London Fields, Hackney regardless of whether they portray scenes in London, France or Scotland. “Most people think that the artist has to be there but any large painting by any artist must be done in a studio,” says McFadyen.

One of the most striking paintings in Made in Hackney – and certainly the most topical – is Tate Moss, which portrays a derelict and since demolished building found by McFadyen and the writer Iain Sinclair during a trip to the London Olympic Games site in 2008. Finding the footpath blocked by the Olympic authorities, McFadyen and Sinclair canoed up a canal into the zone where they discovered the building, once occupied by artists, with the sardonic slogan ‘Tate Moss’ painted on its side.
McFadyen photographed it and from that produced a large-scale oil painting in his studio. Sinclair subsequently wrote about their incursion and when they later tried to return in the kayak they found the canal had also been sealed off. But Tate Moss lives on in McFadyen’s painting and will go on show at The Fleming Collection ten days before the Olympic Games open in the capital.

McFadyen was born in 1950 on the outskirts of Glasgow and as a teenager attended Saturday morning art classes at the city’s School of Art. But he moved to England when he was 15 when his father got a job there and has lived for most of his life in London, where he studied at Chelsea School of Art. Since then his painting career has fallen broadly into three phases all of which will be represented in the exhibition at The Fleming Collection, which this year celebrates the tenth anniversary of its gallery opening and which has become an embassy for Scottish art in London.
The first phase was during and after his time at Chelsea Art School in the 1970s.

McFadyen describes these early paintings as “witty, schematic and self-referential”, adding that “they were about the irony of being a painter, a bit jokey.” It was his appointment as Artist in Residence at the National Gallery in London in 1981 that led to the next phase. Finding himself in close proximity to some 2,000 Old Master paintings, he decided to make the observed world his subject and to paint people and scenes that he had seen.

McFadyen’s final “gear change” came as a result of another appointment, this time as set and costumes designer for The Judas Tree, Sir Kenneth MacMillan’s last ballet at the Royal Opera House in London in 1992. There were no figures to invent because the production already had real ones – the dancers. “I began to feel that I had always been a painter of places,” says McFadyen, and that is what he has been ever since. The East End of London, where he lives and works, has provided plenty of inspiration for the urban landscapes for which he has become well-known over the past 20 years. But he also finds raw material elsewhere. It can be a supermarket in France, where has a home, or a bay in Scotland, to which he often returns. Most are ‘made in Hackney’ in his studio where new works of art can be found alongside the vintage motorcycles that are another of his great loves. McFadyen’s paintings are in many public collections including Tate, the British Museum, Glasgow Art Gallery, the City of Edinburgh, the Hunterian Art Gallery in Glasgow and the Government Art Collection.

“The most exciting thing about The Fleming Collection show is to see the old works on the same wall as the new things,” says McFadyen. “So I will be able to see where I have been. I am looking forward to finding out what it feels like.”

Explosion! Painting as action On Kawara