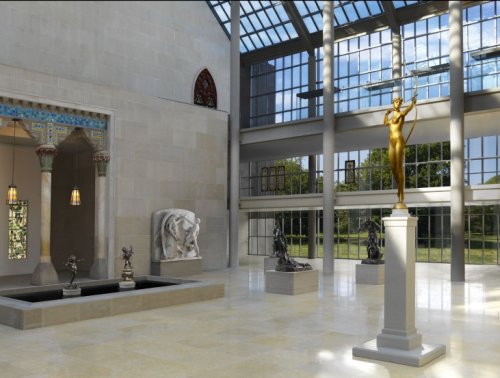 [ad#lb]
When The Charles Engelhard Court—the grand, light-filled pavilion that has long served as the formal entrance to The Metropolitan Museum of Art’s American Wing—reopens this spring after two years of construction and renovation, the Museum’s unparalleled collections of American ceramics, sculpture, stained glass, architectural elements, silver, pewter, glass, and jewelry will finally be seen in all their glory. So, too, will its early American rooms—12 of the Met’s historic interiors, mostly from the colonial period, located on three floors of the wing’s historic core—that have been reordered, renovated, and reinterpreted. The popular American Wing Café will also reopen in its previous location on the park side of the court. The opening of the galleries marks the completion of the second part (begun in May 2007) of a project to reconfigure, renovate, or upgrade nearly every section of The American Wing by 2011.

Morrison H. Heckscher, the Lawrence A. Fleischman Chairman of The American Wing, described the project as “architecture in the cause of art.” He continued: “The goal of the comprehensive renovation of The American Wing is to present the Museum’s superlative collections in the clearest and most logical, as well as most beautiful, manner possible.
Toward that end, we have called upon the building itself—in the use of clear glass for walls and parapets and even a new public elevator, for example—to provide visual access to all facets of the collections.”

The Charles Engelhard Court
Upon entering The Charles Engelhard Court, visitors will immediately encounter a new display of some 60 examples of large-scale sculpture, mosaics, stained glass, and architectural elements. The monumental sculpture collection will be installed on a new main-floor level—near the stunning loggia designed by Louis Comfort Tiffany for the main entrance of Laurelton Hall (about 1905), his Oyster Bay, Long Island, residence—as well as on a lower level in front of the façade of Martin E. Thompson’s Branch Bank of the United States (1822–24), originally located at 15 1/2 Wall Street in New York City. Included will be marble and bronze figurative works by such American master sculptors as Hiram Powers (1805–1873), Augustus Saint-Gaudens (1848–1907), Harriet Whitney Frishmuth (1880–1980), and Paul Manship (1885–1966). These familiar works have been reinstalled in new groupings to encourage aesthetic and thematic comparisons and allow viewers unprecedented up-close access. Notable is the relocation of the marble Milmore and Melvin memorials by Daniel Chester French (1850–1931) from the balcony to the first floor, where they can be appreciated in proximity to other superlative American Beaux-Arts sculptures.
The popular pool feature has been redesigned to showcase two bronze fountains by Frederick William MacMonnies (1863–1937) and Janet Scudder (1869–1940) that are piped to spout water. John La Farge’s ambitious allegorical Welcome Window (1908–9)—a virtuosic work in stained glass—will be installed next to Saint-Gaudens’s marble-and-mosaic tour de force Vanderbilt Mantelpiece (1881–83). American neoclassical marbles of the mid-19th century will return to the courtyard, displayed in a distinct group between a new seating area and the Branch Bank façade.

Balcony Galleries
The American Wing’s outstanding collections of ceramics, glass, silver, and pewter will be installed in the balcony galleries in an integrated chronological sequence, beginning with the colonial period on the east side and continuing into the 20th century on the west, overlooking Central Park. Individual cases will be arranged by medium or theme. Among the highlights of the silver display will be the work of such familiar names as Paul Revere, Jr., and Tiffany & Company. A newly constructed mezzanine-level balcony, accessible via a staircase in the northwest corner, will be devoted almost entirely to the display of a major recent acquisition—250 superb examples of American art pottery crafted between 1876 and 1956, a promised gift of Robert A. Ellison Jr.—that has never before been publicly seen.
Stained-glass windows of the same period, by Frank Lloyd Wright (1867–1959), William Gray Purcell (1880–1965) and George Grant Elmslie (1869–1952), and George Washington Maher (1864–1926) that incorporate large amounts of clear glass will also be installed nearby, with Central Park visible through them.

Additional stunning examples of mid-19th-century ecclesiastical stained-glass windows, installed on the upper balcony to allow for close examination by visitors, will be visible from the courtyard, approximating their original vantage points. Work by every major designer of American stained glass will be represented in this display, the most comprehensive presentation in any American museum.

In all, nearly 1,000 works of art will be exhibited, including two new cases devoted entirely to American jewelry, ranging from early 18th-century mourning rings to surprising works of the Arts & Crafts period. From the courtyard below, the new glass-fronted balconies will reveal a panoply of color, form, and brilliance.

Period Rooms
The American Wing’s 20 period rooms—19 of which return to view this spring— provide an unparalleled view of American domestic architecture and interior design over three centuries.
Twelve rooms, dating from 1680 to 1810, have been newly renovated. The new installation also involved the removal of several interiors of minor interest, the relocation of two 18thcentury rooms (the Verplanck Room, 1767, and the Marmion Room, 1756), and the addition of one new room—from the 1751 Daniel Peter Winne house near Albany, New York—which will be among the rooms opening this May. Built in the Dutch architectural tradition, the Winne Room will be used as a gallery for the display of the Museum’s superb
collection of furniture, silver, painted glass, and early portraiture made and used in the Dutch cultural areas of colonial New York.

With the renovation of the period rooms, visitors will be able to take a complete tour of American interiors and decorative arts in chronological sequence, from the 17th century (the Hart Room, 1680) to the 20th century (the Frank Lloyd Wright Room, 1912–14). A new glass elevator will carry visitors directly to the third floor, where the earliest rooms are located.

Recent research has led to changes in the appearance or interpretation of several of the rooms.

Touch-screen computers will allow the public to access many layers of information about each room, with sections on the objects that are displayed in it, the architecture of the house that the room came from, the original owners, and the history of the room and its installation after it came to the Metropolitan Museum.

The rooms on each floor surround three main decorative arts galleries, which will be newly installed with fine examples of American furniture and portraiture. These will include masterpieces by 18th-century cabinetmakers such as John Townsend of Newport and Thomas Affleck of Philadelphia, and 19th-century counterparts Duncan Phyfe and Charles Honoré Lannuier of New York.

The Erving and Joyce Wolf Gallery
Located within The American Wing, The Erving and Joyce Wolf Gallery is one of some 20 spaces at the Museum specifically designed to accommodate several special exhibitions per year. As part of this second phase of renovations, new wood floors and new lighting were installed in the space. The first exhibition to be housed in the renovated gallery is Augustus Saint-Gaudens, opening June 30, 2009.

The final phase of the American Wing renovation project will include the American paintings and sculpture galleries and the addition of eight completely new galleries for the display of the Museum’s superb collection of this material.

Related Programs
A variety of education programs will be offered in conjunction with the New American Wing galleries opening this May, including: a May 30 afternoon of lectures in the Sunday at the Met program; gallery talks focusing on the variety of media and styles of art on view; family programs for children ages 5-12 and accompanying adult; and workshops for adults with visual impairments, as well as for families with children and adults with learning and/or developmental disabilities.

Audio Guides for The American Wing will be available. Forty-two new audio messages, featuring conversations with American wing curators, will be produced about the works in the new galleries. The fee for rentals is $6 for members of the Museum, $7 for non-members, and $5 for children under 12.

The popular American Wing Café will reopen May 19 in The Charles Engelhard Court, serving traditional American favorites. Its hours are 11:00 a.m. to 4:30 p.m. Sunday, Tuesday, Wednesday, Thursday; and 11:00 a.m. to 8:30 p.m. Friday and Saturday.

Frank Lloyd Wright: From Within Outward Masterworks from the New Orleans Museum of Art