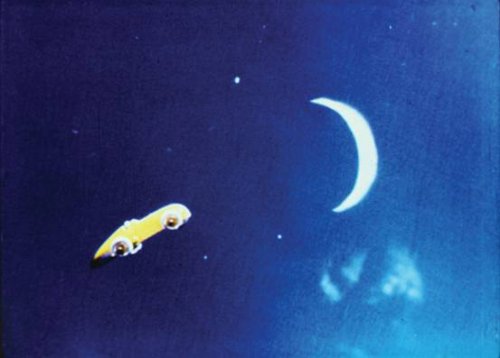 [ad#lb]
New Zealand-born artist Len Lye (1901–1980) kept a close eye on the tremendous expansion of scientific enquiry during his career. This summer’s Len Lye exhibition at the Govett-Brewster Art Gallery highlights the evolution of his ideas in response to scientific discovery.

The Len Lye Collection and Archive at the Govett-Brewster contains hundreds of scientific articles the artist gleaned from the popular press, in fields ranging from psychology to astronomy, particle physics to palaeontology. Featuring several of these news clippings, Len Lye: The Cosmic Archive explores the impact of space age discovery and atomic age anxiety on Lye’s work in a range of media.

The Govett-Brewster’s Len Lye Curator Tyler Cann says the archived clippings reveal the artist thinking about his own work:

“Lye felt that in their own way, both science and art revealed at some fundamentals about the universe. The intriguing parallels between scientific imagery and Lye’s own work often led him to retrospectively interpret them as prescient glimpses of biological and cosmic truths.”

The kinetic sculpture Roundhead, 1960-1 was retitled after Lye saw an image of a Y, or ‘roundhead’ chromosome. He also saved another article showing a model of the atom that looked remarkably similar to the work.

“The Cosmic Archive is partly about the simple ways the present is connected to the deep past, such as the everyday arrival on earth of 800 million year old starlight,” Cann says, “You get the sense that Lye appreciated how thin our veneer of modernity is.”

The summer exhibition comes at a time of surging interest in Lye. The Australian Centre for the Moving Image says this year’s Len Lye solo show was arguably the most loved exhibition it has ever staged. The Gallery’s new book Len Lye, the most comprehensive and visually rich presentation of Lye’s art to date, has garnered widespread praise including selection as one of the New Zealand Listener’s 100 Best Books for 2009. Two further books, one an edited selection of Lye’s writings, have come from his biographer Roger Horrocks, who also curates the current Lye exhibition at Auckland’s Gus Fisher Gallery.

Len Lye: The Cosmic Archive is presented with the support of the Len Lye Foundation and the assistance of the New Zealand Film Archive.

The Govett-Brewster Art Gallery is also grateful for the support of Te Kairanga Wines and Radionetwork Taranaki in presenting this exhibition.