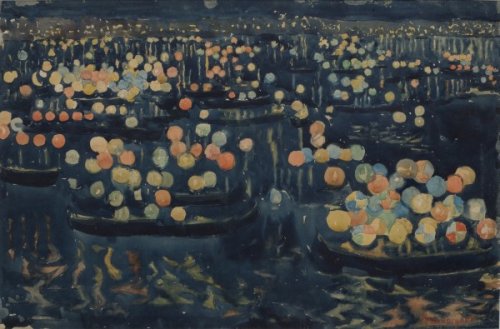 Maurice Prendergast spent his youth in Boston where, like his contemporary the Impressionist Childe Hassam, he began his career in graphic design. In 1891, he travelled to Paris determined instead to become a painter. He studied at the Julian and Colarossi academies and became acquainted with the art of the Nabis and Whistler. Upon his return to the States in 1894 he had his first successes as an artist. By the time of his death in 1924, Prendergast was celebrated as one of the most important American Modernists of the early 20th century, and in particular the first to respond to the post-Impressionist art of Cézanne.

This exhibition assembles more than seventy of the paintings, watercolors, oils, and monotypes that Prendergast made during his two trips to Italy. In June 1898 he travelled to Italy remaining for 18 months, visiting Venice (the main focus of his trip), Padua, Florence, Siena, Assisi, Orvieto, Rome, Naples, and Capri, before returning in late 1899. He returned to Italy in August 1911-January 1912 and once again visited Venice. The exhibition features a corpus of unique works dedicated to Venice, represented by the artist with evocative views of its modern, daily life. While Whistler’s etchings of Venice focus on the picturesque decay of the city, and Sargent with few exceptions painted its monuments, its interiors and its poorer inhabitants, Prendergast instead was attracted to its modernity— to wealthy visitors in fashionable dress, to processions and feste which were in part the expression of historic tradition and in part a response to international tourism. Prendergast chronicles la Serenissima with Impressionist, picturesque views crowded by colourful pedestrians walking through calli, campi and bridges. In addition to his watercolors and oils, archival materials will be on view, such as photographs, letters, guidebooks and travel advertisements belonging to the Prendergasts, now in the Williams College Museum of Art collection. All of which create a strong impression of Italian topography, manners and society c. 1900. Furthermore, two Japanese prints on view show the influence by Japanese coloured woodcuts—whether of landscape or urban scenes—by Kuniyoshi and Toyokuni.

Prendergast’s prolific work on his first trip to Italy consolidated advances provoked by his previous acquaintance with the Parisian avant-garde and catapulted Prendergast to national attention in 1900.
His experience on his second trip to Venice shifted his work towards a more formalist style, with Symbolist content showing how the concepts of Modernism that had emerged in the work of 1898-99 came to fruition during the crucial first decade of the twentieth century. Taken as a whole, Prendergast’s Italian works are, arguably, the most visually sumptuous and aesthetically challenging pieces he ever produced and their presentation in Italy where they were created offers a new point of interest, and contributes to the comprehension of what characterized Modernism in the early 20th century and of the role Prendergast played in the development of Modern art in America.

Prendergast in Italy highlights a selection of the collection of over four hundred works by artist-brothers Maurice and Charles Prendergast in the Williams College Museum of Art. In addition to artworks from WCMA and the Terra Foundation for American Art, the exhibition features loans from over fifty institutions and private collections in the United States, including the Metropolitan Museum of Art, the Museum of Modern Art, the National Gallery of Art and the Museum of Fine Arts, Boston.

The catalogue, published by Merrell Publishers, London, is focused on Prendergast’s major Italian works and is an enduring contribution to the scholarship of modern American art. The main essay of the book is written by Nancy Mowll Mathews, with an additional essay by Elisabeth Kennedy. 250 illustrations of art, photography, maps, and documents give a complete context of Prendergast’s Italy.

The exhibition benefits from the support of the Regione del Veneto and of Intrapresae Collezione Guggenheim. Additional support has been received from Vodafone, that will produce an innovative audio-guide for the exhibition, downloadable directly to visitors’ mobile phones. Hangar Design Group created the graphic design for communications. Radio Italia and Corriere della Sera are media partners for the exhibition.

On October 5, 14 and 28, at 7 pm, a series of 3 free lectures related to the exhibition will take place at the Istituto Veneto di Scienze, Lettere e Arti, Venice. On October 5 the curators Nancy Mowll Mathews and Elizabeth Kennedy will discuss the exhibition.