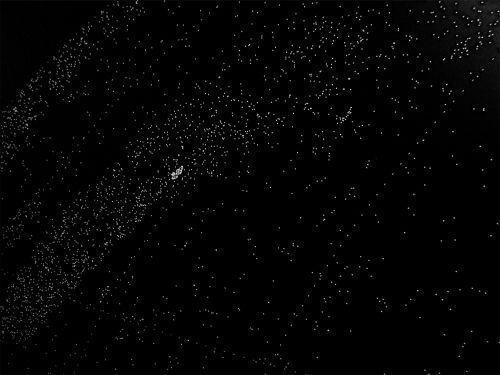 Katie Paterson, born 1981 in Glasgow, Scotland, is quickly gaining international attention for her minimal works that tackle such profound notions as the expanse of space, the breadth of nature, and the overall immensity of life. Using a number of different media to express her ideas–including painting, photography, sculpture, installation, video, and sound–Paterson draws parallels between the micro and the macro. For example, for Inside this Desert Lies the Tiniest Grain of Sand, 2010, she re-buried a single grain of sand (chiseled to be even smaller through the use of nanotechnology) into the Sahara desert; and she is currently creating an ongoing archive of dark spaces throughout the universe, tracking her findings with slides and photographs. Paterson’s artistic output is often tinged with political and environmental meaning, suggesting humanity’s deep dependence on nature, and/or our impact on the earth and its atmosphere.

FOCUS: Katie Paterson, which marks the artist’s debut in an American museum, comprises three important works within her emergent career: Langjökull, Snæfellsjökull, Solheimajökull, 2007; Light Bulb to Simulate Moonlight, 2008; and All the Dead Stars, 2009.

Langjökull, Snæfellsjökull, Solheimajökull–the names of three glaciers in Iceland–is the presentation of three digital films that document a work Paterson created using ice and ambient noise from the three glaciers and their surroundings. The first incarnation of this piece included sound recordings of the glaciers that had been pressed into three records, cast and frozen with melted ice from each of the glaciers. The ice records were then played on turntables until they melted completely. Paterson filmed the turntables as they melted and combined the sounds of the glaciers’ environments–wind and water, for example–with the sound of the thawing records to create Langjökull, Snæfellsjökull, Solheimajökull.

Light Bulb to Simulate Moonlight is a sculptural installation that consists of a lifetime set of lightbulbs that simulate moonlight. Paterson worked with a manufacturer to develop and produce a unique bulb that emits the identical light, in terms of color temperature, wavelength, and amperage, given off by a full moon. When the burning bulb fizzles out, it is immediately replaced with a new one. The piece comes with a total of 289 bulbs (each burning 2,000 hours) and is meant to last 66 years, the average life expectancy of a human.

All the Dead Stars is a laser etching on black, anodized aluminum that maps every known dead star in the universe. In it, our galaxy is indicated by etched marks that shimmer on the surface and form a horizontal line across the map’s center.

Andrea Karnes, curator of FOCUS: Katie Paterson, comments, “Paterson’s approach is at times equal parts inquisitor/scientist/artist. The resultant, starkly poetic works are filled with complexity and metaphor, provoking us to think about what it means to be alive.”

Paterson received her BA in 2004 from Edinburgh College of Art in Scotland and her MFA in 2007 from the Slade School of Fine Art in London. She has since participated in exhibitions at Modern Art Oxford, England; The Power Plant Contemporary Art Gallery, Toronto, Ontario; and Haunch of Venison, London, England. Her work has also been featured in Marking Time, the Museum of Contemporary Art, Sydney, Australia; Exposure: Matt Keegan, Katie Paterson, and Heather Rasmussen, The Art Institute of Chicago; the Whitstable Biennial 2010, Whitstable, England; PERFORMA 09, New York, New York; and Altermodern: Tate Triennial 2009, Tate Britain, London, England. She recently held the John Florent Stone Fellowship at Edinburgh College of Art and was the Leverhulme Artist-in-Residence in the Astrophysics Group at the University College London for the 2010-2011 academic year. Paterson lives and works in London and Berlin.