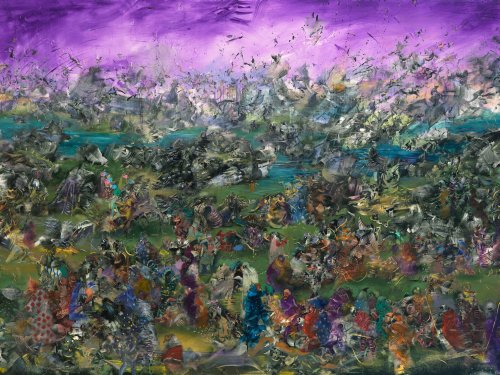 Luce Gallery opens the new season with a group show, and is pleased to present the works of three young artists on the international contemporary art scene: the Italian artist Maurizio Anzeri, the New Yorker of Iranian origin Ali Banisadr, and the English artist Nick Goss.
Comparing the works of these artists, we notice that their expression has the same sense of impalpable illusion, of appearance. Their works can thus be interpreted in two ways: giving one’s own personal meaning to the work observed, or evaluating – from the outside – what the artist has, in certain cases, obsessively attempted to communicate.
For Anzeri (1969 Loano – lives in London), “ghosts” are the suggestions and emotional processes his particular style triggers in viewing: figures and images of men and women of the past, veiled maps, transformed by the hand of the artist who inhabits the present, to the point of generating a metamorphosis.
Also in the work of Banisadr (1976 Teheran – lives in New York), masks play an important role. A painter who depicts scenes disturbed by the density of the images, that produce sensations of “noise”, of “intentional disorientation” in a crescendo of semi-abstraction; as if to provoke a strong, immediate emotional reaction, but one that is also a bit veiled, through the miniatures, often with a monochrome vein in each work, namely a dominant color that increases the power of the visual impact.
Finally, in Goss (1981 Bristol – lives in London) we rediscover that romantic attitude of curiosity regarding empty, forgotten spaces, melancholy atmospheres, in continuous conflict between what is nature and what is artifice, but in which the mask, once again, is often represented with subjects like clowns, as a way of referencing mystery, the occult.
All three share a personal attraction to informal representations, finding the perfect balancing of artistic expression in a middle path between the abstract and the figurative.

Yes and More and Yes and Yes and Why at Frye Art Museum (Seattle, USA) Salvador Dalí at High Museum of Art (Atlanta, USA)