With Glass, Under Glass, Without Glass 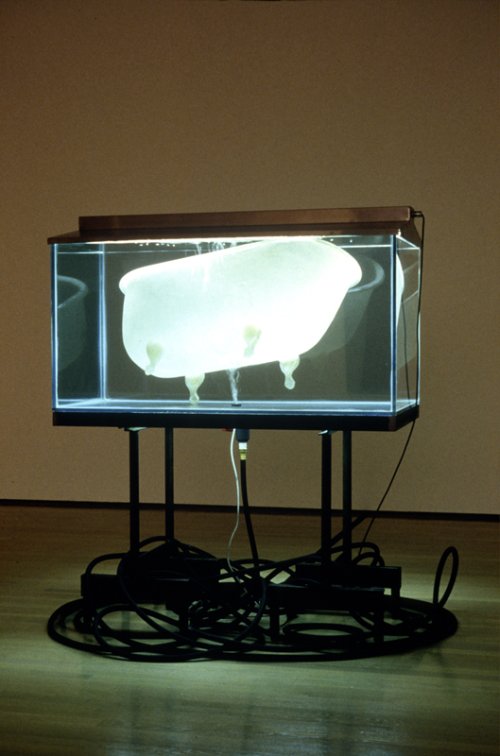 The Musée d’art contemporain de Montréal, a proud partner in the event Montréal City of Glass, is offering an innovative look at its Permanent Collection in a dazzling new show. From April 24 to October 3, 2010, the Musée presents the exhibition With Glass, Under Glass, Without Glass.

With Glass, Under Glass, Without Glass showcases a dozen major works chosen from the Musée Collection and produced by nine artists. The presence of glass as a significant component is the principal basis for this selection that will provide an unusual cross section of the Collection and, at the same time, shed particular light on some of the main issues in contemporary art.

Glass, neon and mirrors; sculpture, architecture and furniture; film screenings, miniature painting and the blank page of paper: these are all elements and media found in the narrative or demonstrative, formalist or poetic works brought together here.

A shattering mirror in Le Tournis, 2008, by Gwenaël Bélanger (Québec), fanciful miniature worlds depicted in negative view in Les Petits Métiers, 1985, and Les Offrandes, 1986, by Philippe Favier (France), a table lavishly set with glass dishes and a glass chandelier in Les Hôtes and Le Grand veilleur, 2007, by Claudie Gagnon (Québec), a glass house in the film installation Home, 1986, by Wyn Geleynse (Ontario), a glass filing cabinet holding blank sheets of paper in Classifié, 1994, by Claude Hamelin (Québec), a neon work in Ciboulette, 1968, by Jacques Hurtubise (Québec), a glass table based on the Fibonacci numerical sequence in Tavolo, 1978, by Mario Merz (Italy), transparency and opacity of filiation in Mère obscure, père ambigu, fils accompli : Agathe, 1994, by Stephen Schofield (Québec), glass and neon sails in La Salle, 1980, by Keith Sonnier (United States) and a surrealistic sculpture of a bathtub in an aquarium in Silence and Slow Time, 1994, by Catherine Widgery (Québec).