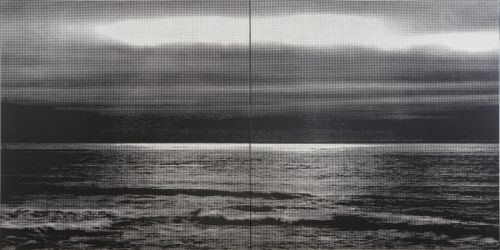 After Reality refers the viewers to the theory of abstract grid associated with the names of Piet Mondrian, Sol LeWitt, Chuck Close, Bridget Riley and Agnes Martin. Arguing against the classics of the twentieth century, Pusenkoff & Pusenkoff withdrawn their version of the theory.

The project has appeared from dialogues between the father and the son on the state relative reality of today’s existance, experiencing the secondary collapse of imagery after the victory of digital media images. Shown in the picture grid gains viewer’s attention, while the rest of the non-objective paintings is lost in pointlessness. The exhibition is based on the theory of shadows, elaborated by the artists, which states that the midtones, light and color are only the shape of the shadow. The time is a relative concept brought by human for psychological comfort. The time can be described in terms of space, which is perceived by the human eye, accusetomed to illusions, exclusively due to the perception of shadows. The exhibition presents the newest series of paintings and interactive installations of 2011–2013.