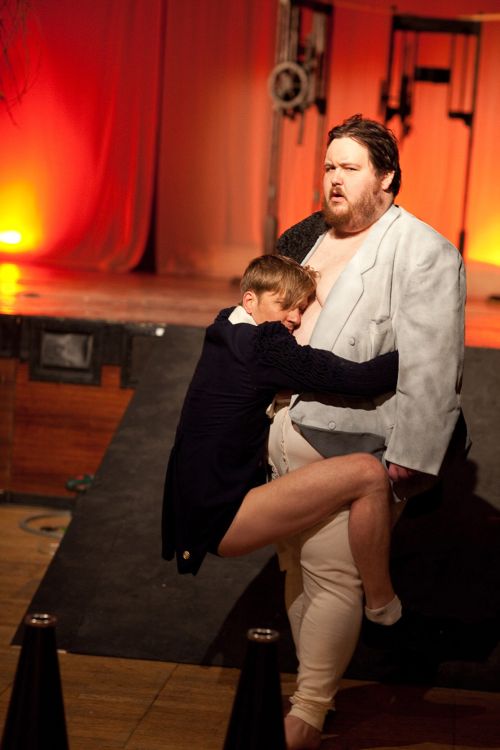 The first art museum exhibition of the acclaimed Seattle performance group Implied Violence features sculptures, costumes, props, masks, video- and photo-documentation of selected past performances as well as a new performance created especially for the Frye Art Museum’s reflecting pools. Titled Implied Violence: Yes and More and Yes and Yes and Why, the exhibition will be on view October 9, 2010 through January 2, 2011.

Co-founded by Ryan Mitchell and Mandie O’Connell, Implied Violence (IV) has produced more than twenty-six multimedia works in the past six years. The exhibition introduces IV’s key concepts and preoccupations for the first time to a broad museum audience and provides an in-depth look at the group’s exploration of altered states; elemental and highly charged materials; and the shifting status of their objects from prop to relic.

Implied Violence: Yes and More and Yes and Yes and Why is intended as a primer for audiences familiar and unfamiliar with IV’s dramaturgy, working methods, and conceptual framework. It will focus on the group’s exploration of ecstatic states, produced by ether, sleep deprivation, blows to the body, extreme exertion, endurance, alcohol, or bloodletting by medicinal leeches. The exhibition will also explore the group’s use of elemental materials such as honey, felt, wax, and gold leaf, materials that have long been valued by human beings in rites and rituals.

The exhibition will open with The Dorothy K: For Better, For Worse, and Forever, a new performance by Implied Violence, its first in Seattle after more than two years of national and international appearances at increasingly prestigious venues. This performance will take place in the Frye Art Museum’s reflecting pools on the first day the exhibition opens to the public, October 9, 2010, beginning at 10 am.

Every hour on the hour an archer will shoot twenty homemade wooden arrows into a target, a beautifully-crafted sculpture of paraffin wax while a small group of performers execute slow silent movements in the Museum’s reflecting pools as the water rises up the legs of their costumes. Monumental kinetic sculptures, one in each of the two bays on the east wall of the reflecting pool, will be set in motion by sentinels, watching over the activities in the pool below. Over the course of the daylong performance, the archery target, freestanding in the water at the south end, will be filled with arrows, completing the artwork.

When the artwork is completed it will be ceremoniously lifted from the pool and carried into the Museum where it will be placed in the exhibition. A sound score, produced live onsite, will play both outside the Museum and inside the Frye Café.

The title of the exhibition at the Frye Art Museum – Yes and More and Yes and Yes and Why – is a phrase from a short story by American poet Gertrude Stein, whose writing has deep resonance for the Implied Violence. “It connotes a heady mix of human desire, avarice, pride, despair and striving”, notes Robin Held, Frye Deputy Director, Exhibitions and Collections and curator of the exhibition. “Its verbal construction with a dense visual result, its breathless repetition-with-a-difference, its change-within-difference, is territory long occupied by IV.”

Implied Violence: Yes and More and Yes and Yes and Why is organized by the Frye Art Museum and curated by Robin Held in collaboration with artist Ryan Mitchell. The exhibition is funded by the Frye Foundation with the generous support of Frye Art Museum members and donors. Seasonal support is provided by ArtsFund. Implied Violence is supported by the 4Culture Site-Specific Program and the Mayor’s Office for Arts and Culture.