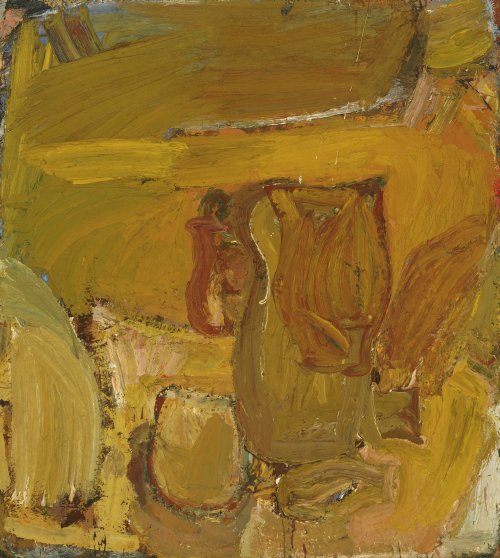 “The speed at which we live our lives, connected to fast-flowing images, desolate and forever on our way somewhere, gives me a strong longing for the inertia, mystery and personal address of oeuvres such as that of Lundquist.”

Thus writes the curator Fredrik Liew in the catalogue for Moderna Museet’s first exhibition in 2010. The gallery on floor 2 is showing 49 works – mainly oils – by this artist, born in Stockholm in 1904, who painted intensely throughout his life, had the opportunity to make an international career but chose not to, and experienced a veritably sensational comeback in 1989, by which time he was practically blind.

Evert Lundquist (1904–94) is a seminal figure in Swedish art history, as an artist and a teacher. He had his first exhibition in 1934 at Konstnärshuset, and made his breakthrough at the same venue with an exhibition in 1957, causing the evening newspaper Expressen to describe him as “a Swedish master painter”.

In the 1960s, he made international appearances, including at prestigious group exhibitions in London, New York and São Paulo. At around that time, Evert Lundquist was appointed professor at the Royal Academy of Fine Art in Stockholm, where he had been a student in the 1920s. After his time at the Academy, he studied in Paris, and in his youth he was sent to a boarding school in Dresden, where he was deeply inspired by German art and philosophy.

Evert Lundquist’s international career was curtailed, and Jeremy Lewison, one of the contributors to the catalogue, writes that the reason could be summed up in two words: bad marketing. Nevertheless, his treatment of colour, canvas and subject matter made a deep impression, as testified by other great painters such as Georg Baselitz and Per Kirkeby, both of whom have contributed to the catalogue.

Torsten Andersson is another artist who was inspired by his colleague Evert, noting with annoyance that most of what has been written about Lundquist “is all ‘cosy’n’rosy’, about shoe strings and pipe-smoking, the remaining 25 per cent is consistently ignored”. Evert Lundquist was himself eager to promote this picture. He disliked being photographed in anything but correct dress, and cultivated the (self)image of a bourgeois artist who painted light and timelessness in the classical tradition.

The curator, Fredrik Liew, has been driven by an urge to peel away the varnish of established institutionalised interpretations from this oeuvre. He has selected paintings that have rarely been exhibited, and placed more familiar works in a new context. The focus is on works where Lundquist explores difficulties, and where the combination of opposites that characterised both his personality and his art is revealed. The complex brew of strong expression and emotional control is brought into play. The works oscillate between abstract/figurative, subject matter/process and monumentality/dissolution. In short, the Moderna Museet exhibition presents Evert Lundquist without his three-piece-suit.

Until now, Lundquist has usually been discussed in relation to his historic predecessors, but the ambiguity, contradiction and openness found in his oeuvre point ahead, to our own contemporary era.

The exhibition Evert Lundquist is sponsored by Scania.