Harun Farocki: SEVEN SCREENS
OSRAM ART PROJECTS
May 20 until November 21, 2010
The SEVEN SCREENS are located next to the OSRAM building at the urban freeway, Mittleren Ring, Munich 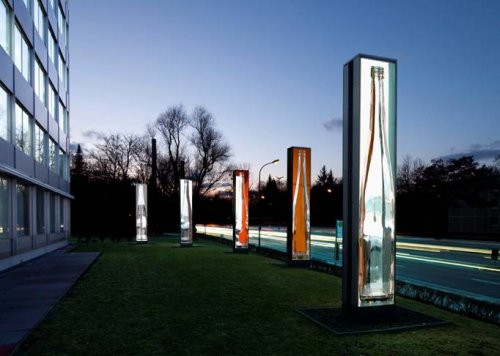 For the seventh new installation on the SEVEN SCREENS the internationally renowned film maker Harun Farocki has created a site specific work that reacts to the ‘spectacle expectation’ that is often associated with LED screens as a medium.
Umgiessen (Re-pouring) refers to Tomas Schmit’s performance, Zyklus für Wassereimer (oder Flaschen) (Cycle for Water Buckets [or Bottles]), which he performed on December 18, 1963 in Amsterdam. The Fluxus artist knelt on the floor in a circle of empty milk bottles and poured water from one bottle into the next until all the water had spilled or evaporated. “The action,” claimed Farocki, “evaded symbolism … it had no vital quality. It was akin to a Beckett play in the simplicity of its conclusiveness. Despite the uniformity of the event, there was a development; the anti-action found an end on its own initiative.”

Harun Farocki transformed the ritual action into a twenty-minute long, unedited film, translated for the spatial arrangement of the stele. Each stele is assigned to a bottle. Farocki let the pouring be done by a robot, whose arm wanders through the expanded pictorial space, executing the unspectacular act of re-pouring.

Born in 1944 in Novy Jicin (Czech Republic). 1966 – 1968 studies at the Deutschen Film ‐ und Fernsehakademie Berlin (West). 1974 – 1984 author and editor of the magazine Filmkritik, Munich. 1998 – 1999 Speaking about Godard / Von Godard sprechen, New York / Berlin (a collaboration with Kaja Silverman); 1993 – 1999 visiting professor at the University of California, Berkeley. Since 1966 Farocki has made more than 100 productions for television and cinema, including children’s television programs, documentaries, essay films and narrative films; since 1996 the subject of many group and solo exhibitions in museums and galleries, most recently in 2009 at the Jeu de Paume, Paris and Museum Ludwig, Cologne; participation in 2007 in documenta 12. 2004 – 2006 visiting professor, since 2006 full professor at the Akademie für Bildende Künste, Vienna.