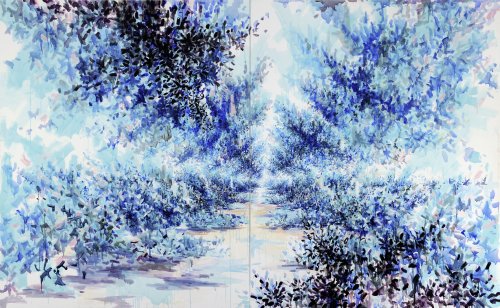 The colorfully intense and energy-charged landscapes by the painter David Schnell (born 1971) enable entanglements from nature and architecture to literally explode in space. In “Hour”, Schnell’s most comprehensive exhibition to date, the Kunstverein focuses on the various groups of works within his oeuvre. It encompasses about 30 large and medium-format paintings ranging in size up to 3 x 4.6 meters as well as a series of linocuts. David Schnell completed his studies at the Academy of Visual Arts in Leipzig in 2002 as a master student under Prof. Arno Rink.

The motif of the landscape is traditionally deployed in either a romantic, contemplative context or as a contrast to civilization and technology. David Schnell, on the other hand, makes use of the landscape as a pure pictorial material. He explores fundamental questions of painting by means of various techniques and recurrent motifs—individual planks of wood, houses, stairs, shacks, tree trunks, and foliage. Composition and the use of color and perspective consolidate his pictures into distinctive experiments dealing with the treatment of space, its representation and refraction. Schnell works with construed space; its horizons overlap and contradict each other are forced apart into various vanishing points. Schnell takes landscape and architecture apart in his scenes and reassembles them in irreal perspectives so that the fragments of his unconventional constructions appear like relicts of a virtual reality.

A starting point for an involvement with David Schnell’s works can be found in the painting “Gelbe Scheune” [Yellow Barn] (2005), the earliest work on show with which the exhibition begins: Schnell guides our glance through a suggested wooden shed to an undefined scenery behind the fragmentarily arranged construction, through the intermediary spaces of which the surrounding vegetation presses. Every attempt to define the architectural structure of the planks more precisely backfires: Although the piece undeniably has depth and the pencil strokes of the underlying perspective grid are clearly visible, the shed increasingly dissolves into individual areas of color while attempting to discover its structure. The extreme vanishing point, which seems inherent to the picture and from which it draws its pulling effect, remains undeterminable: The focus springs back and forth between numerous layers of perspective, staving off all attempts to determine the architectural structure of the planks.

While a quasi architectural interior dominates in the “yellow barn,” interior and exterior increasingly interlock in pieces such as “Ecke” [Corner] (2008) or “Wind” [Wind] (2006) until the architectonic forms are only suggested and fly in space without any visible support in the shape of ungrounded stairs (“Glockenspiel” [Chimes], 2007) or free-floating side walls (“Mikado” [Mikado], 2007): The perception of space is refracted and dissected into individual parts that disorient the eye and literally cause the viewer to totter.

A different kind of dissolution concerning the interdependence of motif and area are at the core of “Code” [Code] (2008) and “Depot” [Depot] (2008), the titles of which already reference the dichotomy between illustration and impact. The wooded area made of smooth tree trunks dissolves like a mirage into individual strips of color the more one concentrates on the total image. Because of the various vanishing points, the pictures seem to expand in an allover effect beyond the pictorial surface into the actual space.

In such recent works as “Moment” [Moment] (2010) or “Prinzip” [Principle] (2010), Schnell combines the dissolution of the motif with that of the space: The organic and architectonic elements have been reduced to the suggested forms to such an extent that they can only be identified as tree trunks or boarding by means of the diverse perspective arrangement. The focusing on the individual components causes the painting to oscillate between concrete scenery and abstract strips of color.

The series of tree-lined streets (“Grün” [Green], “Pink” [Pink], “Blau” [Blue] ,“Orange” [Orange]) takes up the extreme vanishing point already seen in the “Gelbe Scheune,” combining it, for example, with a very different painterly problem: Based on the large-format tableaux arranged in a strict onepoint perspective, he examines how motif and color relate to each other. Lush green, gaudy pink, deep blue and a fiery orange make the motif appear in various degrees of aggressivity and abstraction. In “Schein” [Appearance] (2008), the basic black and blue tint of which is accentuated with red flecks of paint, the unnatural tonality and the color contrast recedes so far into the background that the motif is hardly recognizable as such and dissolves in a whirl of color.

In his linocuts, finally, David Schnell does without any colors at all and devotes himself completely to the question of abstraction when he realizes individual paintings purely in black and white. The compositions of the works on canvas are reduced in the printed works to an absolute minimum of clean lines and sharply contoured areas. By transferring the spatial views into a strict twodimensionality, Schnell places the underlying compositions of the paintings at the center of attention and returns his dealings with the space back to the realty of the drawn area.

The exhibition has been organized in cooperation with the GEM Museum voor actuele Kunst in The Hague, Holland, where it can be seen from July 7 to October 10, 2010, and the Museum zu Allerheiligen in Schaffhausen, Switzerland, which it will be shown from February 13 to April 24, 2011.

A day in the life of the Golden Age Harun Farocki: SEVEN SCREENS