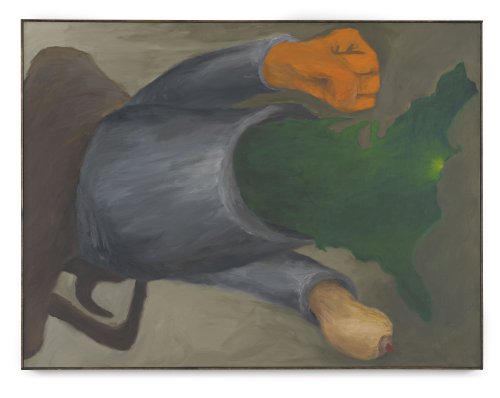 “Ideas are the most powerful thing in the world.”
Lee Lozano, 1970

For the first time, Lee Lozano (1930-1999) is presented to a Nordic audience. This American artist, whose original and provocative oeuvre is still unknown to the general public, especially in Europe, was part of the 1960s art scene in New York, an “artists’ artist” in the midst of her contemporary avant-garde. In the borderland between pop art, minimalism and conceptual art, she created powerful, independent works in a context that was dominated by male artists.

Lee Lozano was a technically fully-fledged painter and draughtswoman. Throughout her life, she had also been passionately interested in science, and her works are characterised by a great attention to detail. This is also evident in her diaries, in which she documents her chaotic yet strictly organised life, registering everything from professional and private victories to day-to-day activities in her studio – not unlike today’s many graphic novel artists and bloggers.

Lozano was extremely multi-faceted and went through several artistic phases. Some 60 paintings and hundreds of works on paper, along with her text-based works, from 1960 to 1972 – the precise duration of her career – are featured in the exhibition, which was produced by Moderna Museet and is shown in the great hall. The early “surrealist” paintings, sexually charged with both humour and aggressiveness, her gigantic so-called tool paintings, some of which are six metres long, and the Wave Series are included in this presentation, along with Lozano’s conceptual “language pieces”, signalling her development towards immaterial art.

The Language Pieces, which Lee Lozano started working on in 1968-69, were investigations with self-formulated rules and times for starting and finishing. General Strike Piece was a way of dealing with her retreat from the New York art scene, for a ‘total personal and public revolution’. Here, Lee Lozano recorded her last visits to gallery openings and museums, or ‘uptown functions’, as she called them. Lozano was not alone in challenging the commercialisation of art at the time, but she went further, advocating (and implementing, in her own case) an abolishment of the artist ego, in favour of ‘sharing’. In this respect, not least, Lozano was one step ahead of both art history and social development. It is easy to draw parallels with concepts that have been focused in the 2000s, such as relational art and file-sharing.

Lozano compensates for the isolation that General Strike Piece entailed with Dialogue Piece, where she invites people from the art scene to a discussion in her studio, including Claes Oldenburg, Dan Graham and the gallery owner Dick Bellamy. In the dialogue, both parties are equal participants and the energy flows in both directions. Sharing, not dominating, is the idea.

The phallic imagery found in her drawings and tool paintings, is open to several interpretations; they infer potency as a symbol of power and unrealised possibilities, but they also portray how this can convert into its opposite and become dominating, like the patriarchal society she lived in.

Dropout Piece from 1972 was Lee Lozano’s farewell to the New York art scene.

A few years ago, a renewed interest in her unique oeuvre began to appear, and the depth and width of her work is now being highlighted. Since her death, Lee Lozano has been featured in several solo and group exhibitions in the USA and Europe, including at the P.S.1 Contemporary Art Center in New York in 2004 – an exhibition that was supposed to be on for three months but was so popular that it was extended to nine months – and went on to Documenta 12 in Kassel.

Evert Lundquist at Moderna Museet Great masters: from the beginning of the 20th century until now