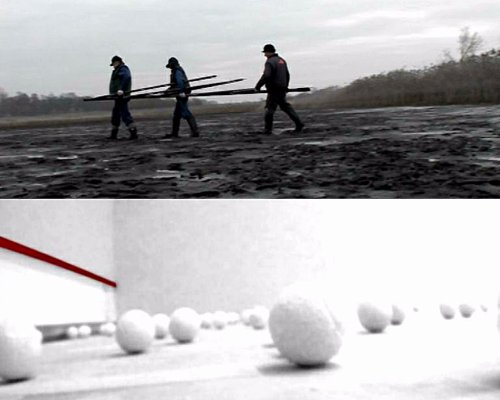 Born in 1983, Anna Molska graduated from the art academy in Warsaw two years ago and has already attracted great attention for her films. The films have an unusually distinctive visual poetry and are often highly suggestive. She consciously uses a visual language which alludes to the aesthetics and culture of the former East bloc. Above all, she draws on the manifestations of Russian abstract art from the beginning of the 20th century – Suprematism and Constructivism – which tried to embrace all aspects of life in their activities. The belief was that art should participate in the creation of society. Molska’s images are full of such echoes from the past, which are an important part of Poland’s history today.

Anna Molska’s films can be regarded as filmed performance art, with the immediacy and uncertainty such a performance involves. She does not use actors in her films, but rather ordinary people, who in part play themselves. The participants are told what they are expected to do but there is no exact script. Molska is interested in how we function and act at both the individual and collective level – and by extension within society as a whole.

The exhibition presents Molska’s graduate project: W=F*s (Work) and P=W:t (Power). The titles are based on fundamental formulas from the world of physics.1
In W=F*s (Work) we encounter some workers who are driven out into a deserted muddy landscape. Upon their arrival, they work together in a group to construct a kind of scaffolding. When that is finished, the men climb up onto the triangular construction. They create a human formation reminiscent of the Soviet Union’s visual propaganda images, in particular Alexander Rodchenko’s photograph entitled The Male Pyramid from 1936. In her film Molska plays with old East bloc ideas such as the myth of work, the strength of the body, and the power of the collective.

The second film, P=W:t (Power), lacks a human presence and instead concentrates more on abstract images and geometric patterns. White balls move around a squash court that is clearly marked with red lines. We never learn which force set the balls in motion. On several occasions the film is shown upside down, which contributes to a feeling of unreality/abstraction. In Molska’s films, the sound track reinforces the impact of the images and often plays an important role. There are obvious parallels with Russian avantgarde art at the beginning of the 20th century. The images almost seem to be a moving abstract painting by the Russian Constructivist El Lissitzky.

Completed is a work that Molska has created together with artist Wojtek Bakowski. The film takes place at Bemowo Airport in Warsaw, where some men appear sitting in specially designed black wheelchairs. They move back and forth but all the time within the white-painted circle that borders the airport apron. The men are concentrating on what they are doing and are listening to their MP3 players for instructions that direct their movements. Each of them is in his own world, but to us these isolated individuals still create a group. They wear the same clothing – black trousers and white T-shirts. There is something meditative, almost hypnotic about their movements – a feeling that is reinforced by the suggestive nature of the spoken text.